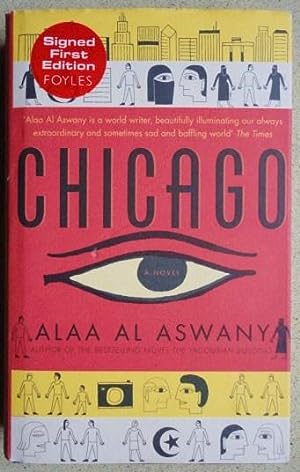 Signed without inscription by the author. Appears to be an unread copy. Weysprings Books is a Member of: the IOBA and PBFA, and subscribes to the Associations' Codes of Ethics. Size: 8.75" x "5.5". N° de ref. de la librería 006339

“The only Arabic-language novel to have created greater buzz and sell more copies since ‘The Yacoubian Building’ is Al Aswany’s second novel, ‘Chicago’ ... a rare opportunity to consider the contemporary Egyptian condition.” Financial Times

‘He examines with warmth, wit and psychological acuity the way in which exile throws a spotlight on the Egyptianess of his characters. Chicago seems destined to repeat the success of ‘The Yacoubian Building’. With his vivid characters, warm humour and short snappy scenes, Al Aswany is like an Egyptian Anne Tyler. A Hollywood film of Chicago would not seem out of the question – were it not for the downbeat ending. For just when things seem to be moving towards a fairy–tale conclusion, Al Aswany throws a huge, cold bucket of realism over the narrative. It speaks much for his integrity and makes Chicago an incomparably richer and stronger novel.’ Adam Lively, Sunday Times

‘By shifting the location to America al Aswany asks questions of his characters – all but a handful of whom are Egyptian – not demanded of those in The Yacoubian Building. To what extent is the immigrant obliged to remain loyal to his or her old country? Can people ever really cast off the identities into which they were born and become fully paid-up members of a new society? In presenting us with the collision of these two standpoints, al Aswany has written a novel that, if nothing else, feels extremely timely.’ William Skidelsky, Observer

‘Alaa Al Aswany is among the best writers in the Middle East today, a suitable heir to the mantle worn by Naquib Mahfouz, his great predecessor, whose influence is felt on every page. Yet Al Aswany has his own magic. His remarkable gift for narrative momentum sustains Chicago. It reveals a gifted novelist in mid–flight.’ Guardian

‘Chicago, like The Yacoubian Building, is an enormously good-hearted book.’ New Statesman


Every effort is made to describe books accurately and in accordance with
internationally accepted standards. We will refund the purchaser the full cost if
we have made an error in the description. Please contact us before returning a
book and give the reason for the return.


David Purt, trading as Weysprings Books, PO BOX 23, Hindhead, Surrey, GU27 9DD, UK. Email: weybooks@yahoo.co.uk. Telephone: 07786 294662. Orders usually ship within 2 business days. Shipping costs are based on books weighing 2.2 LB, or 1 KG. If your book order is heavy or oversized, we may contact you to let you know extra shipping is required. Weysprings Books is a professional member of the Independent Online Booksellers Association (IOBA) and subscribes to the Association's Code of Ethics which can be found at: www.ioba.org/pages/members/1006/weysprings-books.