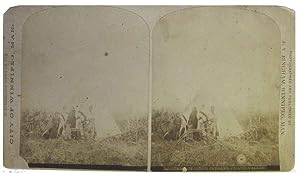 Original stereo view photograph. Two similar images each measuring 9.75 X 7.75 CM (rounded at the top). Mounted on 10 X 17.5 CM on studio card (with rounded corners). Information about the photographer printed on sides (title at bottom of right photo). Some soiling and wear to photos (two small chips to the bottoms of the images). Card also shows some soiling, light wear to edges and is very subtly curled upwards at the long edges. The image is slightly washed out. good to very good 142 in Bingham's 'Stereoscopic Views of the City of Winnipeg, Manitoba'. Imageg shows a card with a native family next to it. They stand in a field with a teepee behind them. Frederick F. Bingham arrived as a photographer in Winnipeg in 1881. Coming from Minnesota he was probably attracted, as so many others were, by the Canadian Pacific Railway and the opportunities it's arrival provided. He took numerous shots of Winnipeg durings its boom years in 1881 and 1882, including the series ?tereoscopic Views of the City of Winnipeg, Manitoba.?His 1882 series ?tereoscopie Views of West Lynne and Vicinity?featuring streets and natural scenes around West Lynne, Manitoba, now a ghost town near the Canada-US border. Bingham? relationship with the Canadian Pacific Railway remains unclear. Although many of his photographs state that he was an ?fficial Photographer to the CPR? there are no records in the company? archives that they employed Bingham formally, nor was there a formal endorsement of his work implied by his ?fficial?status. However, the railway did purchase copies of his photos on several occasions and they were sometimes used for the railways promotion. Through early 1886, Bingham appeared to have made north-western Ontario his home base, travelling from Port Arthur to take photographs along the CPR line at such stops as Chapleau, Schreiber, and White River. By 1890, however, Bingham was back in the USA, being a landscape photographer in Superior, Wisconsin then, three years later, at a studio in Omaha, Nebraska. N° de ref. de la librería 136718

ALL PRICES are net in US Dollars, postage and insurance extra. Orders in Canada subject to 5% GST.

METHOD OF PAYMENT: By credit card (Visa), personal check, draft or money order drawn on an American or Canadian bank. In US funds. NB. US Postal Money Orders must be International. Orders paid by check will be held until check clears, unless customer is know...


We use new shipping materials and charge insurance at cost as needed.