Artículos relacionados a Die in Battle, Do Not Despair: The Indians on Gallipoli,...

Portada Peter Stanley Die in Battle, Do Not Despair: The Indians on Gallipoli, 1915 (...
Imagen del editor 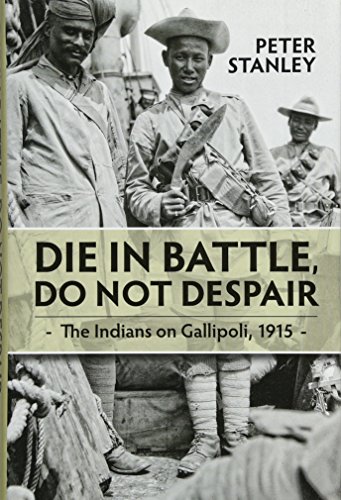 Die in Battle, Do Not Despair: The Indians on Gallipoli, 1915 (Hardback)

Language: English. Brand new Book. In 1915 about 15,000 Indian troops - two or three times as many as previously thought - served in the dramatic and doomed eight-month Gallipoli campaign. Their part in the invasion of Gallipoli has lain largely unknown since the publication of long disregarded regimental histories and forgotten British officers' memoirs.Force G, as it came to be known, included Sikhs, Hindus and Punjabi Musalmans (as Muslim soldiers were called) and four battalions of Gurkhas. They served in an infantry brigade, a mountain artillery brigade, in medical units and in a large contingent of mule drivers, who perhaps made the Indians'most important contribution to the campaign.About 1,600 of the Indians who served on Gallipoli died, in actions at Gurkha Bluff and Hill 60. They took part in terrible, failed attacks, at Gully Ravine and Gully Spur and in the climactic attempt in August to seize the summit of Sari Bair- one of the Gurkhas' most cherished battle honours. Though commemorated on the great memorial to the missing at Cape Helles (because most Indians'bodies were cremated or, actually, lost) they are practically invisible on Gallipoli today.The Indian story of Gallipoli has barely been told before. Not only is this the first book about their part in the campaign to be published in the century since 1915, but it also tells their story in new and unexpected ways. Though inescapably drawing on records created by the force's British officers, it strives to recapture the experience of the formerly anonymous sepoys, gunners and drivers, introducing Indians of note- Mit Singh, Gambirsing Pun, Kulbahadur Gurung, and Jan Mohamed - alongside the more familiar British figures such as Cecil Allanson, who led his Gurkhas to the crest of Sari Bair at dawn on 9 August 1915. It explores for the first time the remarkably positive relationship that grew on Gallipoli between Indians and Anzacs, and includes a complete list of the Indian Army dead commemorated on the Helles Memorial on Gallipoli. Professor Peter Stanley, one of Australia's most distinguished military social historians, has drawn on an extensive range of unpublished evidence, including official and private records in Britain, Australia, New Zealand and India to tell the story of the Indian experience of Gallipoli that has waited a century to be told. N° de ref. de la librería BTE9781910294673

Título: Die in Battle, Do Not Despair: The Indians ...

Stanley paints a fascinating picture of Indian army forces... * Military History Monthly 17/02/2016 * ... Stanley's book is inspirational and will delight readers interested in the minute details of military history and of the Indian Army in particular. Scholars of late colonial India will find much information to mine, both empirically in terms of the Indian element in the First World War and methodologically in terms of how to write such histories. The instructive quality of Stanley's book is illuminating. * The Journal of Military History * " ... without question, the best work of military history that I have read for a considerable time. Brilliantly researched, fluently written and fascinating to read, I recommend it to anyone with an interest in the Gallipoli campaign, the British Army in India, the Indian Army or even the Great War in general ... A quite brilliant book, and beautifully produced in high quality paper." * Long Long Trail *

Given the scarce nature of many of the books offered by this store, Orders usually ship within 5-15 business days. Book Depository is an international bookseller. We ship our books to over 100 countries around the globe and we are always looking to add more countries to the list. We really, really love books and offer millions of titles, currently over 10 million of them, with this figure increasing daily. Living by our motto, 'Bookseller to the World', we focus on offering as many titles as possible to as many customers as possible. Most of the within books offered within this ?Hard to find? store are dispatched within 10 - 15 business days of your order. Apart from publishers, distributors and wholesalers, we even list and supply books from other retailers! We hope you enjoy our selection and discover your new favourite book.


All books are shipped in new condition. We are happy to accept returns within 30 days of receipt. Given the scarce nature of many of our books, orders placed with ?Book Depository hard to find? usually ship within 5-15 business days. Domestic Shipments are sent by Royal Mail, and International by Priority Airmail. Please contact the seller directly if you wish to return an order. Name of business: The Book Depository Ltd Form of legal entity: A Limited Company Business address: The Book Deposito...


Given the scarce nature of many of the books offered by this store, Orders usually ship within 5-15 business days. Domestic Shipments are sent by Royal Mail, and International by Priority Airmail. We are happy to accept returns within 30 days of receipt. Please contact the seller directly if you wish to return an order.