Artículos relacionados a Baseball's Greatest Hit: The Story of "Take... 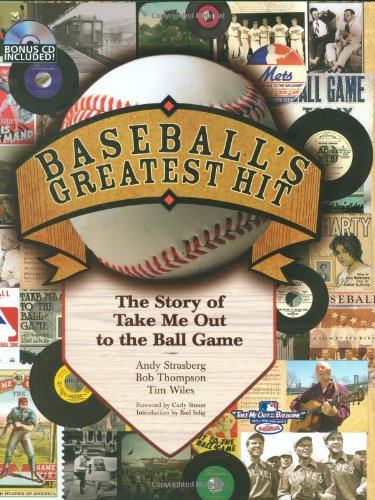 Baseball's Greatest Hit: The Story of "Take Me Out to the Ball Game" BK/CD

(Book). The authorized tie-in book to the 100th anniversary of this beloved song. "Take Me Out to the Ball Game" is the third most frequently sung song in America, after "Happy Birthday" and "The Star-Spangled Banner," and you'd be hard-pressed to find an American who doesn't know the words. With the release of this special edition, full-color, hardcover book, the complete story of the song is presented, taking us on a fascinating journey into how "Ball Game" has come to take a unique place in our cultural landscape. With images of historical newspaper clippings, baseball cards, sheet music, movie stills, ballplayers at the mic, and of course, Harry Caray leading the crowd at Wrigley, Baseball's Greatest Hit also comes packaged with a CD of rare and classic recordings, including performances by Dr. John, Arturo Sandoval, George Winston, Harry Caray and many more. Features an introduction by baseball commissioner Bud Selig and a foreword by Carly Simon. Baseball's Greatest Hit is a gorgeous celebration, not only of a song, but of baseball, music, pop culture, and the creative ways that Americans have always taken popular music and made it their own. And as the book traces the song's evolution over the last 100 years, it also traces the evolution of American culture from the early days of Tin Pan Alley and sheet music pluggers; through the early role of women as baseball players and fans; through movie musicals, baseball's expansion west, rock and roll, and modern ballparks; right up to the present-day when in July 2007 more than 50 Hall of Famers came together to sing "Take Me Out to the Ball Game" in Cooperstown.