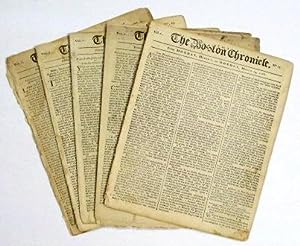 Volume I, Nos. 13, 16, 20, 23, 24. Each issue 8pp. Each Number disbound, with some loosening. Scattered foxing and light wear. Good+. A short-lived publication, The Boston Chronicle's last issue appeared on June 25, 1770. It is an invaluable resource of contemporary political and cultural activities in America and England. We offer five of the first volume's weekly issues. In addition to articles on agriculture and miscellaneous matters, the Chronicle focuses on the leading role played by the Massachusetts General Court and the Town of Boston in resisting British rule; their struggle with the Royal Governor; events in England, pro and con, in response to the colonies' intensifying spirit of independence and the English clamor for greater freedom, such as John Wilkes's struggle; activities in the other Colonies and Canada; and the ongoing struggle for American religious independence from the Church of England. The Chronicle features columns, headed 'America,' and 'Letters', from South Carolina and elsewhere, on travel, maritime activities, and political and social events. Advertisements by local merchants are plentiful. FIRST EDITIONS. N° de ref. de la librería 32635