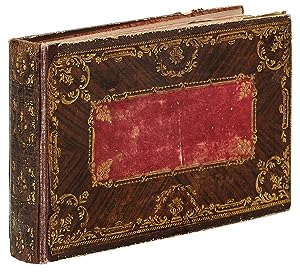 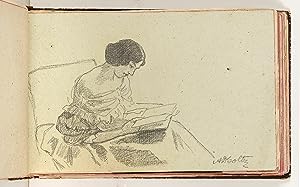 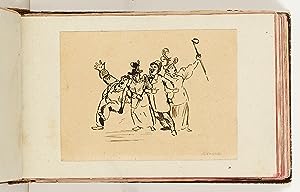 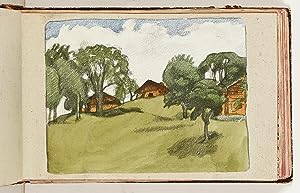 Oblong octavo (7" x 4.25"). A German autograph album containing over 80 elements (laid-down or tipped-in), including many original watercolors, gouache paintings, pen and ink drawings, pencil drawings, autographs and inscriptions, a few prints and photographs, etc., spanning the years from the 1830s to the early 20th Century. Bound in mid-18th Century gilt-decorated leather (with the initials "E.S." stamped in gold on the back board), original binding laid onto cloth boards, red paste paper endleaves, edges stained red. The leather is rubbed, front hinge is loose, a few detached leaves, very good. A remarkable album of original drawings and autographs, most likely kept by a German-speaking artist and illustrator with close ties to the theater. Included is a pencil drawing of Gutle Schnapper Rothschild (and what appears to be a portrait of her husband Karl Mayer), which would link the album to the Rothschild family of bankers in Austria. The album consists of mostly drawings, either tipped-in or mounted on the laid paper leaves. Among the many notable pictures are: two oval ink drawings (double-portraits of two young women and two girls), and one pencil drawing of Frederic the Great, all identified by the album's owner as works by the painter and printmaker Daniel Chodowiecki; a watercolor and charcoal portrait of an actor by Karl Alexander Wilke; two watercolor drawings of troopers in costume by Johann Nepomuk H÷chle, and two fine gouache and watercolor portraits of the actor Christian Rub by an unknown artist. Also included is an ink drawing of the escape to Egypt by Karl von Binzer, and a charcoal drawing of a woman reading by Alexander Goltz, drawn directly on an album leaf. Many other portraits and landscape drawings, theater scenes and designs, flowers, etc., and including several inscriptions and autographs. A very charming album of high artistic value. A detailed list of the 80+ illustrations is available on request. N░ de ref. de la librerÝa 386562