Artículos relacionados a AMERICAN ALOHA Cultural Tourism and the Negotiation... 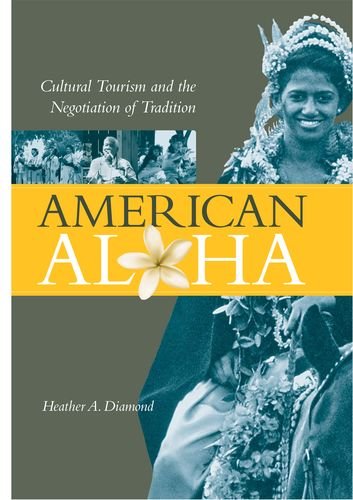 AMERICAN ALOHA Cultural Tourism and the Negotiation of Tradition

Book by Diamond Heather A

At the 1989 Smithsonian Folklife Festival, throngs of visitors gathered on the National Mall to celebrate Hawai'i's multicultural heritage through its traditional arts. The "edu-tainment" spectacle revealed a richly complex Hawai'i few tourists ever see and one never before or since replicated in a national space. The program was restaged a year later in Honolulu for a local audience and subsequently inspired several spin-offs in Hawai'i. In both Washington, D.C., and Honolulu, the program instigated a new paradigm for cultural representation.Based on archival research and extensive interviews with festival organizers and participants, this innovative cross-disciplinary study uncovers the behind-the-scenes negotiations and processes that inform the national spectacle of the Smithsonian Folklife Festival. Intersecting the fields of museum studies, folklore studies, Hawaiian studies, performance studies, cultural studies, and American studies, American Aloha supplies a nuanced analysis of how the carefully crafted staging of Hawai'i's cultural diversity was used to serve a national narrative of utopian multiculturalism - one that collapsed social inequities and tensions, masked colonial history, and subordinated indigenous politics - while empowering Hawai'i's traditional artists and providing a model for cultural tourism that has had long-lasting effects.Heather Diamond deftly positions the 1989 program within a history of institutional intervention in the traditional arts of Hawai'i's ethnic groups as well as in relation to local cultural revivals and the tourist industry. By tracing the planning, fieldwork, site design, performance, and aftermath stages of the program, she examines the uneven processes through which local culture is transformed into national culture and raises questions about the stakes involved in cultural tourism for both culture bearers and culture brokers.