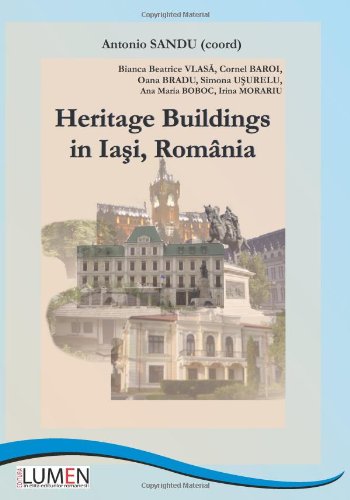 Iasi culture is based on a deep sense of eternity. To leave Iasi, the traveler needs a momentum necessary to climb the mild hills surrounding it. They are a point of rest in his path before taking the momentum to other horizons as well as a stop before a temple, in the way of the traveler, who driven by affairs or longing carries his steps to Iasi. Iasi is a city of great ideas, the first great union, the first theater in Romanian, the first literary memorial museum (Hut of Ticauu) and the first Museum of Natural History (Vasile Rosetti House). The authors of the volume: Antonio Sandu, Ana Maria Boboc, Bianca Beatrice Vlasa, Cornel Baroi, Irina Morariu, Oana Bradu and Simona Usurelu aim to present 70 buildings from the nineteenth century and early twentieth century from Iasi, from the perspective of their cultural significance, with a presentation from 1 to 5 illustrations for each monument. Among the cultural treasures of the city we include: Palace of Culture, Copou Park, Alexandru Ioan Cuza University Dosoftei House, Golia Monastery etc. This book, a combination of paper and ink, hides a realistic blend of art, history, architecture, in a modern style and classic at the same time. Any traveler will be carried through imagination in the history and culture of Iasi, will learn about the intellectual environment of nineteenth century and will be visually enriched through the building details given in illustration.