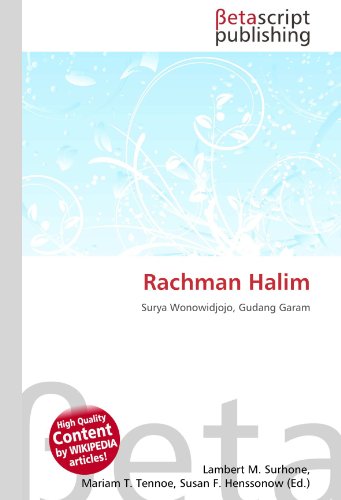 Please note that the content of this book primarily consists of articles available from Wikipedia or other free sources online. Rachman Halim (30 July 1947â€“27 July 2008) was an Indonesian businessman. Halim was born Tjoa To Hing in Kediri, East Java to a prominent Chinese Indonesian (Hokchia totok) family. He was the first son of Surya Wonowidjojo, founder of Gudang Garam, a major Indonesian kretek (clove cigarette) manufacturer.Halim succeeded his father to become the CEO of Gudang Garam in 1984, and expanded the company into other fields. Forbes, an American business publication, ranked him and his family as the richest in Indonesia for a number of years and listed them in 2005 as having a net worth of US$2.8 billion.