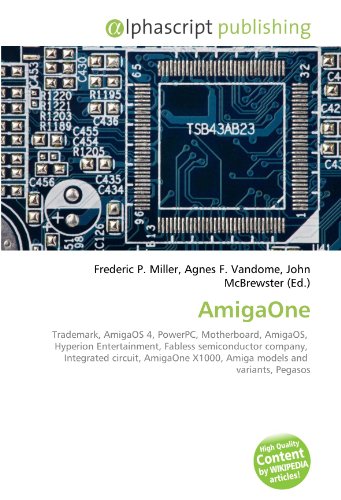 Please note that the content of this book primarily consists of articles available from Wikipedia or other free sources online. AmigaOne is a trademark, currently used by a company called A-Eon, for the purpose of selling hardware for running AmigaOS 4. It was previously used by computer vendor Eyetech Group Ltd., for the same purpose. Eyetech previously used the trademark to sell the Teron series of PowerPC POP mainboards, intended to run AmigaOS version 4.0 created by Hyperion Entertainment in Belgium. The Teron motherboards are based on Articia northbridge chipsets designed by MAI Logic, Inc., a fabless Taiwanese-American integrated circuit (IC) company. A-Eon have announced a new computer, the AmigaOne X1000, which they have claimed will feature a dual core PowerPC motherboard, and is also intended to run AmigaOS 4.x