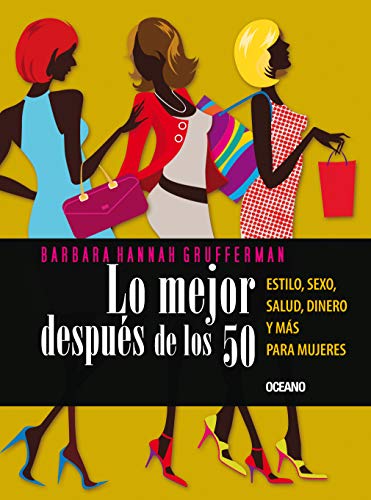 The key to aging past 50 is to save the best of what we have and to open new perspectives and possibilities to obtain the fullness of life. "I wanted a book that was direct and could bring together useful information into the same location with a common meaning, without complications and without a lot of technical language," declares Barbara Hannah Grufferman. In effect, we have a practical guide that can accompany women who are starting a new stage in their life and want to know the key aspects of their being. The author supports the accumulated knowledge of the experts in several distinct areas: stylists, personal trainers, fashion gurus, and financial specialists The result is an enjoyable and accessible manual that contains information regarding diverse themes that are crucial for the mature woman, such as disease prevention, skin care, makeup, fashion, economic independence, sex, and keeping in shape.

Barbara Hannah Grufferman writes a weekly column for AARP and Huffington Post, is the Chief Pundit for FOF (FabOverFifty), and blogs regularly for several other major websites. A recent recipient of the Generations of Strength Award from the National Osteoporosis Foundation, Barbara has appeared on the Today Show, Good Morning America Health, CBS' The Early Show and numerous radio and internet programs, including NPR, Dr. Oz Sirius Radio on the Oprah Channel, and Sirius Doctor Radio. She also travels around the country, speaking to groups on health, nutrition, career, fitness, sex and many other topics pertaining to being fit and fabulous after 50. She lives in New York City.