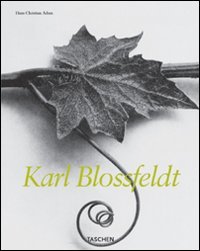 A serious man who earned his living as a teacher, Karl Blossfeldt (1865- 1932) seems an unlikely candidate for aesthetic canonisation. But his photographs of plants, taken in their thousands over more than thirty years, reveal a formally rigorous talent whose precision and dedication bridge the nineteenth and twentieth century worlds of Image making as do his contemporaries Eugene Atget and the recently rediscovered Charles Jones. In Blossfeldt's hands, plants and their constituent parts become almost architectural in their construction. Form and structure are laid bare to highlight the secrets of growth in the natural world, and to provide lessons that could be applied to industrial design. Beautifully but starkly composed against plain cardboard backgrounds, Blossfeldt's images, relying on a northern light for their sense of volume, reveal nothing of the man but everything of themselves. They are still-lifes, piercingly final statements on their subject. Blossfeldt's intention was always to document his teaching methods and to establish a photographic archive of his work. Neither was to be, but his images have endured owing to their technical brilliance and their ongoing fascination to students in a number of disciplines. Like their maker, they are quietly and lastingly effective.

Hans Christian Adam (born 1948) works as a photographic consultant in Gottingen. He has published many articles and some books on photography, and Taschen also publish his volume "Edward S. Curtis. The North American Indian".