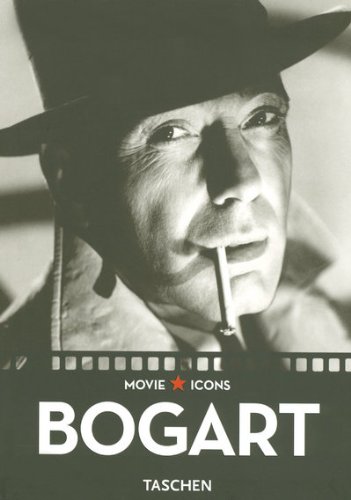 Humphrey Bogart is a legend and an icon whose magic has not dissipated with time. The wounded tough guy image Bogart molded over the decades of his career still resonates. There is a truth to this image; audiences sense that the world-weariness, the angst, and the vulnerability, which made him an icon of noir as well, were rooted somehow in reality. Even if the spectator knew nothing about his personal life, they believed and still do believe in his performances in cinema classics like "Casablanca", "The Maltese Falcon", "High Sierra", "The Big Sleep", "In a Lonely Place", and "The African Queen". The "Movie Icon" series: People talk about Hollywood glamour, about studios that had more stars than there are in heaven, about actors who weren't actors but were icons. Other people talk about these things, "Taschen" shows you. "Movie Icons" is a series of photo books that feature the most famous personalities in the history of cinema. These 192-page books are visual biographies of the stars. For each title, series editor Paul Duncan has painstaking selected approximately 150 high quality enigmatic and sumptuous portraits, colorful posters and lobby cards, rare film stills, and previously unpublished candid photos showing the stars as they really are. These images are accompanied by concise introductory essays by leading film writers; each book also includes a chronology, a filmography, and a bibliography, and is peppered with apposite quotes from the movies and from life.

James Ursini has co-written and co-edited eleven books with Alain Silver; Ursini and Silver are considered two of the foremost authorities on the subject of film noir. Among Ursini's most notable works is the successful Film Noir Reader series. He has also contributed articles to various film magazines and has supplied the DVD commentary for numerous classic film noirs. He has a doctorate in motion pictures and has lectured on filmmaking at colleges in the Los Angeles area.