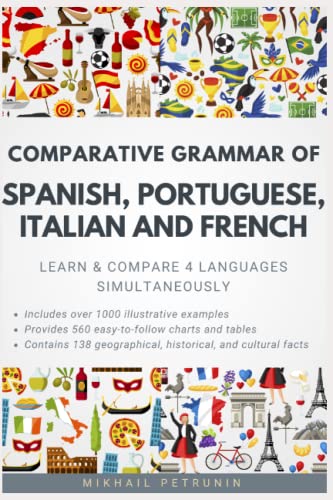 Nowadays thousands of grammar books, textbooks, outlines, references and language guides of Spanish, Portuguese, Italian and French are published year by year. However, all of them teach these languages separately. Here you will find a comparative grammar of the four major Romance languages together based on their grammatical and lexical similarities for you, lovers of foreign languages, to learn and compare Spanish, Portuguese, Italian and French simultaneously. It is an audacious endeavor to find or create a novel way of learning to speak several languages and becoming a multilingual person. It took me over 3 years to finish the book. It consists of over 700 pages, 10 chapters covering all the grammatical aspects of these 4 languages. It includes over 1000 examples, 500 easy-to-follow charts and tables. It contains 138 geographical, historical and cultural facts about Spanish, Portuguese, Italian and French countries.Below I will discuss several reasons why I decided to write this book and why you need it.1) First of all, this book is written for readers like you who are fond of or would like to learn Spanish, Portuguese, Italian andFrench simultaneously or just to get an all-round knowledge of all these four Romance languages. It is designed not only for beginners who do not have an extensive knowledge of grammar, yet need a guide through the grammatical concepts of all mentioned above languages, but also intermediate and advanced students who would like to have a reference book ofseveral Romance languages at once.2) Second of all I spent many years learning these languages separately, which was a complete waste of time before I realized it. This book will hopefully save you a great deal of time and allow you to study and compare at a glance the four main Neo-Latin languages.3) Knowledge of foreign languages is fast becoming a necessary requirement for those who are involved in international business, tourism, culture and education. This book offers you four languages to learn, which will make you feel at homewherever you go, whether as a tourist or businessman.4) Learning several languages simultaneously or one by one will train and strengthen your memory and can help stave off such terrible diseases as Alzheimer’s.5) If you have never studied several languages at once before and you like challenges, then you should definitely try it. Because it is a really entertaining and challenging task to do.In conclusion, I would like to sincerely thank you for preordering the book and your interest in it. I hope it will help you improve your languages and become multilingual.