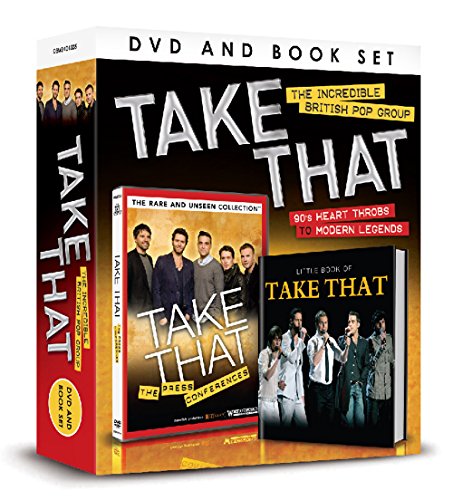 TAKE THAT: THE PRESS CONFERENCES DVD: Only the interviews - Uncut As TAKE THAT launch their biggest and most successful release and tour, this DVD delves into the news archives. Featuring: COME BACK TOUR PRESS CONFERENCE UNCUT - 25.11.05 Gary, Mark, Jason and Howard talking frankly about their hopes and aspirations for a reformed TAKE THAT, contemplating life without Robbie. 2011 TOUR PRESS CONFERENCE UNCUT - 26.10.10 No more rumours as the tour dates are announced and the show goes on! BEHIND THE SCENES OF TV INTERVIEWS REVEALING INSIGHTS FROM THE BAND THEMSELVES IN THEIR OWN WORDS Unseen is believed unseen since first broadcast. Rare indicates believed never previously released on DVD. This DVD is unofficial. It does not seek to represent Take That or any official body working with them. It does not feature any original recordings by Take That. Contains flash photography LITTLE BOOK OF TAKE THAT: When Take That split in 1996, they broke the hearts of their legions of fans. They were, without doubt, the biggest boy band Britain had ever produced and they had reeled off hit after massive hit. Ten years later, four of the original members reunited and, incredibly, began to enjoy the same incredible level of success they had achieved in the early 1990s. When the unthinkable happened and fifth member Robbie Williams rejoined the band, the circle was complete and the stage was set for the real Take That to resume their recordbreaking feats. Can we truly say that, this time, Gary Barlow, Howard Donald, Jason Orange, Mark Owen and Robbie Williams are back for good? The Little Book of Take That takes you on a rollercoaster ride through the highs and the lows, from the early days in Manchester to the pinnacle of pop stardom, from the gloom of the split to the joys of the glorious reunion.