Artículos relacionados a Sandel: A Novel 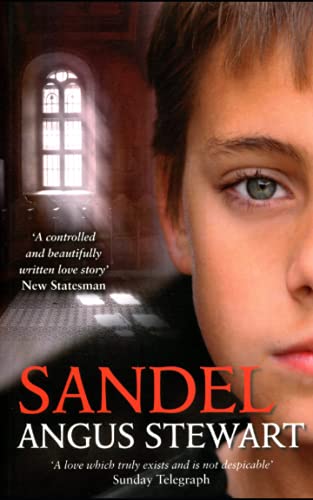 'Here is a controlled and beautifully written love story . . . this is a superb stylistic feat.' --New Statesman
'Mr Stewart has really succeeded with this young character, and in depicting a love which truly exists and is not despicable.' --The Sunday Telegraph

'The writing is always intelligent, its sensual quality surprisingly beautiful.' --The Times

Set in the 1960s in an Oxford college, when being gay was still an offence punishable by imprisonment, 'Sandel' tells the story of a love affair between an undergraduate (David Rogers), and a cathedral choir boy (Antony Sandel). Tony - beautiful, provocative, mischievous, sensitive and sometimes overwhelmed by the intensity of his own feelings - bewitches Rogers. Both are talented musicians, and Sandel's astonishing voice, which Rogers explores as his accompanist at the transient moment of glory which precedes it breaking, is soon central to the relationship. Sensual, profound, often funny and never sentimental, Stewart provides a definitive analysis of same-sex love in the context of a relationship that puts sex in its place and reveals love as the one agent of the human condition that can set us free. The setting of the novel in an Oxford college (actually Christ Church, which the author attended) and the well-observed description of life in an English choir-school - short trousers, boats on the river, afternoon tea and cricket before Evensong - along with the stylistic quality of the writing, places 'Sandel' in a tradition made famous by Evelyn Waugh ('Decline and Fall' and 'Brideshead Revisited'). There are echoes too of 'Maurice', the novel by E M Forster published after his death in 1970. On both sides of the Atlantic, 'Sandel' became formative reading for a generation of boys growing up in the 1970s who knew their feelings fell outside the heterosexual male stereotype, and it remains a gay cult novel today, with prices on Amazon reaching thousands of dollars a copy. But its fundamental message holds good for all people in all eras whatever their sexual persuasion, and is delivered with great subtlety and skill by a master craftsman. ABOUT THE AUTHOR Angus Stewart was born in 1936, the son of John Innes Mackintosh Stewart, the novelist and Oxford academic who wrote bestselling crime fiction as Michael Innes. He was educated at Bryanston School in Dorset, and later at Christ Church Oxford. Stewart's first published work was ‘The Stile’ (1965), which won the Richard Hillary Memorial Prize. His first novel, 'Sandel’, which is in many respects autobiographical, came in 1968 and is now a cult classic, recently commanding very high prices on the internet. Before and after its publication, Stewart lived for long periods in Morocco. In 2016 his personal memoir, ‘Tangier’ (1977), was reissued in a new edition, including photographs by the author. His experiences there explain a great deal about the author of 'Sandel’, and his exposure to Tangier’s legendary artistic community, which included Paul Bowles, Tennessee Williams, Francis Bacon, Alan Sillitoe, Ruth Fainlight, Rupert Croft-Cooke, Alec Waugh, William Burroughs, Gavin Maxwell, Francis Bacon, Joe Orton and others, prepared the way for his second novel, ‘Snow in Harvest’ (1969). ‘Sense and Inconsequence: Satirical Verses’ followed in 1972, with a Foreword by W H Auden. A third novel, ‘The Wind Cries All Ways’, which includes a startling description of the author’s incarceration in a Tangier mental asylum, has yet to be published. After his mother's death in 1979 Stewart returned to live in England, and died in Oxfordshire twenty years later.

Descripción Paperback. Condición: New. Language: English. Brand new Book. Set in the 1960s in an Oxford college when being gay was still an offence punishable by imprisonment, Sandel tells the story of a love affair between an undergraduate (David Rogers), and a cathedral choir boy (Antony Sandel). Sensual, profound, often funny and never sentimental, Stewart provides a definitive analysis of same-sex love in the context of a relationship that reveals love as the one agent of the human condition that can set us free. Nş de ref. del artículo: APC9781900064088