Artículos relacionados a The Civil Contract of Photography: 1 (Zone Books) 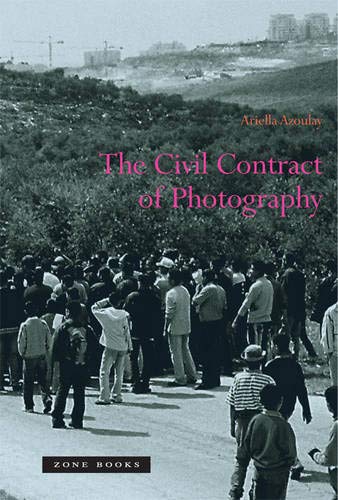 An argument that anyone can pursue political agency and resistance through photography, even those with flawed or nonexistent citizenship.In this compelling work, Ariella Azoulay reconsiders the political and ethical status of photography. Describing the power relations that sustain and make possible photographic meanings, Azoulay argues that anyone-even a stateless person-who addresses others through photographs or is addressed by photographs can become a member of the citizenry of photography. The civil contract of photography enables anyone to pursue political agency and resistance through photography.Photography, Azoulay insists, cannot be understood separately from the many catastrophes of recent history. The crucial arguments of her book concern two groups with flawed or nonexistent citizenship: the Palestinian noncitizens of Israel and women in Western societies. Azoulay analyzes Israeli press photographs of violent episodes in the Occupied Territories, and interprets various photographs of women-from famous images by stop-motion photographer Eadweard Muybridge to photographs from Abu Ghraib prison. Azoulay asks this question: under what legal, political, or cultural conditions does it become possible to see and to show disaster that befalls those who can claim only incomplete or nonexistent citizenship?Drawing on such key texts in the history of modern citizenship as the Declaration of the Rights of Man together with relevant work by Giorgio Agamben, Jean-Francois Lyotard, Susan Sontag, and Roland Barthes, Azoulay explores the visual field of catastrophe, injustice, and suffering in our time. Her book is essential reading for anyone seeking to understand the disasters of recent history-and the consequences of how these events and their victims have been represented.