Artículos relacionados a Apollo Root Cause Analysis: A New Way of Thinking

Apollo Root Cause Analysis: A New Way of Thinking 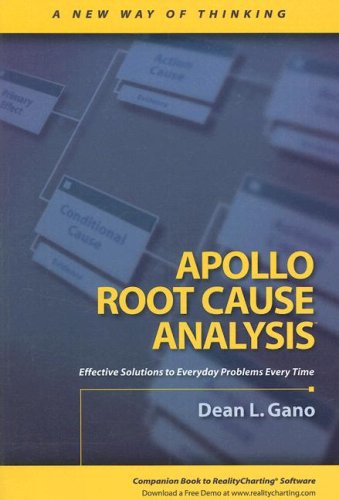 The purpose of this book is to share what the author has learned about effective problem solving by exposing the ineffectiveness of conventional wisdom and presenting a principle-based alternative called Apollo Root Cause Analysis that is robust, yet familiar and easy to understand. This book will change the way readers understand the world without changing their minds. One of the most common responses the author has received from his students of Apollo Root Cause Analysis is they have always thought this way, but did not know how to express it. Other students have reported a phenomenon where this material fundamentally 're-wires' their thinking, leading to a deeply profound understanding of our world.At the heart of this book is a new way of communicating that is revolutionising the way people all around the world think, communicate, and make decisions together. Imagine a next decision-making meeting where everyone is in agreement with the causes of the problem and the effectiveness of the proposed corrective actions with no conflicts, arguments, or power politics! This is the promise of "Apollo Root Cause Analysis".

Dean L. Gano is president of Apollonian Publications, LLC, which is dedicated to helping others become the best event-based problem-solvers they can be by providing highly effective problem-solving tools in the form of books and computer software. Mr. Gano brings more than 36 years of experience in process industries, power plants, and computer software development to this endeavor. He started his incident investigation work and subsequent fascination with problem-solving while working on solutions to the incident at Three-Mile Island Nuclear Power Station in the late 1970s. He has participated in hundreds of incident investigations since and has studied the problem-solving process through his teaching and consulting work. He has been teaching his unique version of root cause analysis to people around the world for more than 20 years. His message is taught in nine different languages on five continents and is used globally by many of the Fortune 500 companies, the National Aeronautics and Space Administration, the Federal Aviation Administration, and other government entities. To ensure an effective problem analysis is done every time, Mr. Gano created RealityCharting software, which is becoming the world standard problem-solving tool. Mr. Gano has a Bachelor of Science in Mechanical Engineering and General Science, is a formerly certified nuclear reactor operator, and a Vietnam veteran. He is a senior member of the American Society for Quality and the American Society of Safety Engineers. He is a philosopher and student who finds great happiness in learning and helping others become more successful in their life pursuits.

1. Apollo Root Cause Analysis: A New Way Of Thinking

2. Apollo Root Cause Analysis: A New Way of Thinking

3. Apollo Root Cause Analysis: A New Way of Thinking