Artículos relacionados a Fopdoodle and Salmagundi: Words and Meanings from Samuel...

Fopdoodle and Salmagundi: Words and Meanings from Samuel Johnson's Dictionary That Time Forgot 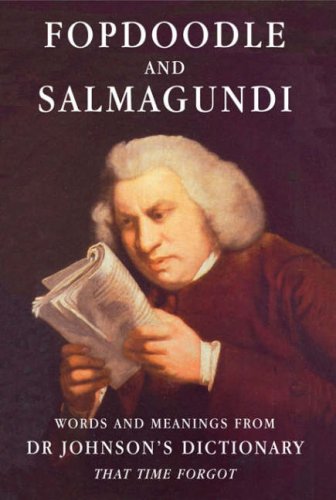 This is a book of words and meanings that urgently need your help. Fopdoodle, salmagundi, kissingcrust, runnion and stingo are all endangered for lack of use. Since Samuel Johnson completed his dictionary scores of words, such as fizgig, jobbernowl and sponk have slipped away from common usage. You will very likely never have heard of most of them while some will be known but not used. Scores of others have definitions so obscure that you wonder why a word was needed at all. Was it necessary to have quite so many different words to describe the less fortunate members of society? Many, such as atom (cannot be split) and urinal (where water is kept for inspection) have changed their meaning completely, often with hilarious consequences. Some, such as tea (lately drunk in Europe) and coffee (comforteth the brain and heart) are included to provide a glimpse of life 250 years ago. Others such as Dragon (perhaps imaginary) and Swallow (a bird that hides in winter) show as yet unfilled gaps in understanding. "Fopdoodle and Salmagundi" will delight anyone who is fascinated by the evolution, humour and eccentricity of the English language or enjoys the challenge of a word game. In compiling this selection of little used and unfrequented gems of our language the editor makes the simple request that you slip them into conversation in the hope that their use will be perpetuated. They really are too good to lose.

Samuel Johnson LL.D. 1709 - 1784, often referred to simply as Dr Johnson, was one of England's greatest literary figures: a poet, essayist, biographer, lexicographer and often considered the finest critic of English literature. He was also a great wit and prose stylist whose bons mots are still frequently quoted in print today. Between 1747 and 1755, Johnson wrote his best-known work, A Dictionary of the English Language.

1. Fopdoodle and Salmagundi: Words and meanings from Dr Johnson's dictionary

2. Fopdoodle and Salmagundi: Words and meanings from Dr Johnson's dictionary