Artículos relacionados a The Viipuri Library by Alvar Aalto, 1927-34 (Historical... 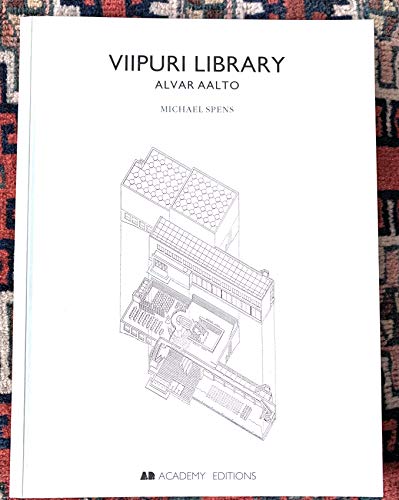 The Viipuri Library was designed by Alvar Aalto from 1927 and passed through three stages of design development before completion in 1934. This winning project was a major coup for Aalto due to the large number of competitors involved in the competition for the site. The Viipuri Library also marked Aalto's transition from classicism to modernism and highlighted his leading role in the modern movement. This volume also includes an analysis by Sergei Krevchenko, the Russian architect in charge of restoration. Newly discovered archive material and a detailed memoir of 1935 Viipuri by architect Ole Hannson are also included.

Descripción Distributed in the United States of America by St. Martin's Press, 1994. Paperback. Condición: VERY GOOD. Pages are intact and are not marred by notes or highlighting, but may contain a neat previous owner name. The spine remains undamaged. Nş de ref. del artículo: 1854903667_abe_vg

Descripción Wiley-Academy 1995-01-18, 1995. Paperback. Condición: Very Good. Item is in very good condition. If supplemental codes/CDs for textbooks are required please contact us prior to purchasing as they may be missing. Nş de ref. del artículo: DS-1854903667-2

Descripción Distributed in the United States of America by St. Martin's Press, 1994. Condición: Good. A+ Customer service! Satisfaction Guaranteed! Book is in Used-Good condition. Pages and cover are clean and intact. Used items may not include supplementary materials such as CDs or access codes. May show signs of minor shelf wear and contain limited notes and highlighting. Nş de ref. del artículo: 1854903667-2-4

Descripción John Wiley and Sons, 1995. Paperback. Condición: Used; Good. **SHIPPED FROM UK** We believe you will be completely satisfied with our quick and reliable service. All orders are dispatched as swiftly as possible! Buy with confidence!. Nş de ref. del artículo: 1917017