Von Weizsacker, Ernst U. Factor Four: Doubling Wealth, Halving Resource Use - A Report to the Club of Rome

Factor Four: Doubling Wealth, Halving Resource Use - A Report to the Club of Rome 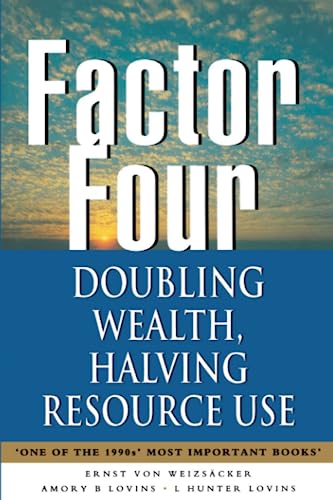 Since the industrial revolution, progress has meant an increase in labour productivity. Factor Four describes a new form of progress, resource productivity, a form which meets the overriding imperative for the future (sustainability). It shows how at least four times as much wealth can be extracted from the resources we use. As the authors put it, the book is about doing more with less, but this is not the same as doing less, doing worse or doing without. In 1972, the Club of Rome published Limits to Growth, which sent shock waves around the world by arguing that we were rapidly running out of essential resources. This Report to the Club of Rome offers a solution. It lies in using resources more efficiently, in ways which can already be achieved, not at a cost, but at a profit. The book contains a wealth of examples of revolutionizing productivity, in the use of energy; from hypercars to low-energy beef; materials, from sub-surface drip irrigation to electronic books, transport, video conferencing to CyberTran, and demonstrating how much more could be generated from much less today. It explains how markets can be organized and taxes re-based to eliminate perverse incentives and reward efficiency, so wealth can grow while consumption does not. The benefits are enormous: profits will increase, pollution and waste will decrease and the quality of life will improve. Moreover, the benefits will be shared: progress will no longer depend on making ever fewer people more productive. Instead, more people and fewer resources can be employed. While for many developing countries the efficiency revolution may offer the only realistic chance of prosperity within a reasonable time span. The practical promise held out in this book is huge, but the authors show how it is up to each of us, as well as to businesses and governments, to make it happen.

3. Factor Four: Doubling Wealth, Halving Resource Use - A Report to the Club of Rome

4. Factor Four: Doubling Wealth, Halving Resource Use - A Report to the Club of Rome