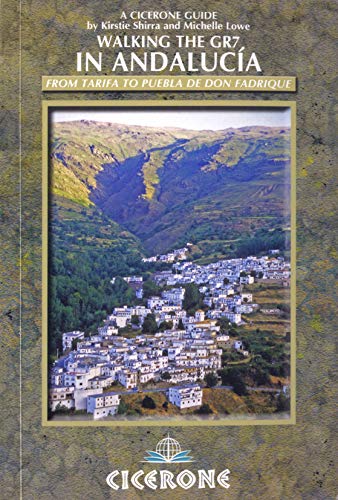 Trekking guidebook to the GR7 in Andalucia, from Tarifa to Puebla de don Fadrique. Both variants included; the north through Cordoba, the south through Granada. Over 700km, the trail takes over a month and explores varied landscapes, including the Sierra Nevada. Included are practical accommodation details to help plan. Part of the E4 route. Comprehensive guidebook to walking the GR7 through Andalucía in southern Spain. Both variants, the northern that visits Cordoba, and the southern that goes through Granada and the Sierra Nevada are included. This wonderfully varied route starts at the southernmost tip of Spain on the coast at Tarifa, and meanders through the provinces of Cadiz and Malaga before dividing. The northern fork measures 718km, 34 to 41 days in total, while the southern fork is 735km, 35 to 42 days. Both routes finish at Puebla de don Fadrique. The fully waymarked route crosses seven stunning natural parks and the Sierra Nevada national park, home to mainland Spain's highest peak - Mulhacen. All the information needed to plan a trek is included. Stage maps use official IGN mapping. Detailed route descriptions are given for around 60 days of walking, with options for creating shorter sections and days. The GR7 avoids tarmac roads wherever possible, instead taking ancient trade routes, bridlepaths and even goat tracks, there are only a few sections of steep ascent, so this route is suitable for walkers of reasonable fitness and navigational ability. With its white sandy beaches, pine and oak forests, near-desert plateaus, snow-capped peaks, traditional villages, lush river valleys and olive groves, the GR7 in Andalucía takes you on a journey through the most geographically diverse region on the Iberian peninsula. Famous among holidaymakers for its coastline, the GR7 offers the opportunity to see another side of Andalucia. You will explore little-visited hidden gems, enjoy the natural parks and visit unspoilt peaceful villages. Detailed route description for around 60 days of walking, with options for creating shorter sections and days. Information on all the villages en route including accommodation so that you can plan your own route. Seasons Spring (March-June) and autumn (Sept-Oct) are recommended. Avoid July and August for the heat (up to 40°C) and winter for lack of facilities Centres Start point: Tarifa; end point Puebla de Don Fadrique Difficulty Waymarked route. Northern variant = 711.5km with nearly 16,500m of ascent (34-41 days). Southern variant = 719.8km with 16,860m of ascent (34-42 days). Facilities en route most days Must See natural parks, historic towns, whitewashed villages of the Alpujarras, cave houses, Ronda, view from Antequera castle, Priego de Cordoba, castles in Jaén, museum at Orce. NOTA: El libro no está en espańol, sino en inglés.

Kirstie Shirra is a freelance writer and environmental campaigner. Kirstie has also written Scotland's Best Small Mountains for Cicerone and regularly writes for walking publications. Michelle Lowe is a writer, researcher and campaigner who loves walking. Based in Edinburgh she has spent time living, travelling and trekking in Ecuador, Peru, Nepal and Europe. Contributor Miguel Angel Santaella has traveled and walked in Asia, New Zealand, Central Europe and Spain and is the creator of the www.rutasyviajes.net website which posts GPS routes for each stage of the GR7.