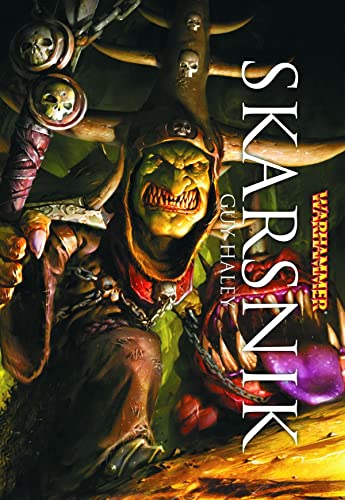 The rise of the goblin king

The goblin chieftain Skarsnik’s name is known and feared throughout the Old World. When a greenskin horde threatens the borders of the Empire, the greatest military minds in Altdorf seek assistance from a most unlikely source – the disgraced poet Jeremiah Bickenstadt. Though long since consumed by madness, he claims to have spent a great deal of time in the company of the feared Warlord of the Eight Peaks, and can offer a unique insight into what it is that drives and motivates him. From humble beginnings, a monstrous legend is born.

Guy Haley began his career on SFX Magazine in 1997 before leaving to edit Games Workshop’sWhite Dwarf, followed by the SF magazine Death Ray. Since 2009 he has been a wandering writer, working in both magazines and novels. He lives in Somerset with his wife and son, a malamute and a an enormous, evil-tempered Norwegian Forest Cat called, ironically, Buddy.