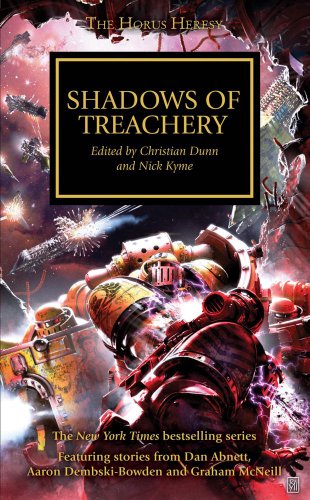 Reseńa del editor:
A short story collection on the Horus Heresy, from the battlefields of Phall and Isstvan, to the haunted shadows of terra itself the Horus Heresy rages on across the galaxy in this collection of short stories and novellas.
Biografía del autor:
Christian Dunn - After cutting his teeth on Inferno! and Warhammer Monthly (the only comic book ever to win an Eagle Award and be canceled in the same week), Christian Dunn spent many years as the Commissioning Editor of both Black Flame and Solaris. He is now safely ensconced back in the bosom of Black Library as their Range Development Editor where runs the e-book, Print on Demand and audio ranges, as well as being responsible for unearthing new writing talent.

He lives in Nottingham, England and always keeps a freshly greased chainsaw under his pillow in anticipation of the inevitable zombie apocalypse.

Nick Kyme hails from Grimsby, a small town on the North East coast of England known for its fish (a food, which ironically he dislikes profusely).

Nick moved to Nottingham in 2003 to work on White Dwarf magazine as a Layout Designer, before moving on to become a Journalist, and has had three short stories published in Inferno in that time. Nick now works for the Black Library as an Editor and has written several series including the best-selling Salamanders novels