Artículos relacionados a Manufacturing Consent: The Political Economy of the...

Manufacturing Consent: The Political Economy of the Mass Media 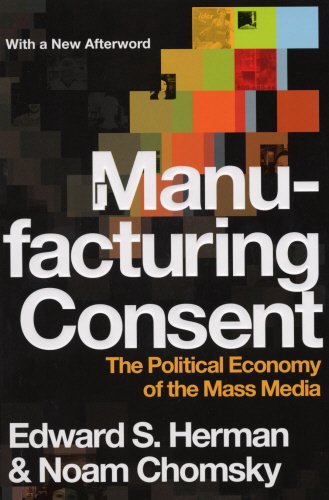 "Chomsky ranks with Marx, Shakespeare, and the Bible as one of the ten most quoted sources in the humanities-and is the only writer among them still alive." (Guardian)

"Noam Chomsky is one of the most significant challengers of unjust power and delusions; he goes against every assumption about American altruism and humanitarianism." (Edward Said)

"Not to have read [Chomsky] is to court genuine ignorance." (Nation)

We normally think that the press are cantankerous, obstinate, and ubiquitous in its search for truth. In Manufacturing Consent Edward Herman and Noam Chomsky show how an underlying elite consensus largely structures all facets of the news. Far from challenging established power, the media work hard to discover and mirror its assumptions. The authors skilfully dissect the way in which the marketplace and the economics of publishing significantly shape the news. They reveal how issues are framed and topics chosen, and contrast the double standards underlying accounts of free elections, a free press, and governmental repression. The authors conclude that the modern mass media can best be understood in terms of a 'propaganda model'. News and entertainment companies dedicate themselves to profit within the established system. Their interests require that they support the governing assumptions of state and private power. The propaganda model provokes outrage from journalists, editors and broadcasters, but twenty years after first publication, Manufacturing Consent remains the most important critique of the mass media.

Manufacturing Consent: The Political Economy of the Mass Media