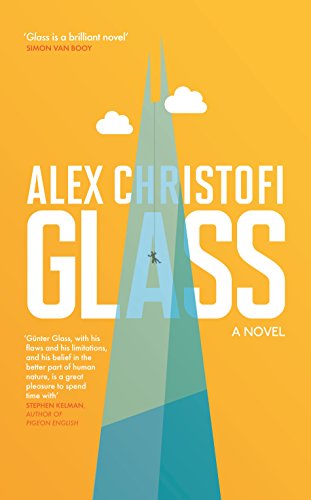 Christofi's debut novel is both charming and funny, and not a little affecting, too ... there's enough here to show you the author has plenty more to offer and that, like his hero, he definitely has his heart in the right place. (Daily Mail 2015-01-30)

This first novel makes me want to use words like "sparkling", "sharp", "translucent" - not surprising, since it is about glass and one man's obsession with it ... Christofi's writing really does gleam with wit, inventiveness and an offbeat charm. (Kate Saunders The Times 2015-02-07)

By far the most fun I've had with a British debut novel since Ned Beauman's Boxer, Beetle ... The comedic, mock-picaresque approach should appeal to fans of Beauman, Joshua Ferris, Matthew Quick, or even the Channel 4 sitcom Friday Night Dinner ... With a first novel this good, great things are surely in store for Alex Christofi. I daresay you'll take Günter Glass to your heart and follow his misadventures with rapt amusement. (Rebecca Foster BookHugger 2015-03-02)

Glass is pure. Glass is transparent. Glass is sharp.

Günter Glass, ex-milkman and aspiring window-cleaner, is certainly pure. And he's pretty transparent. But the jury's still out on how sharp he is.

What naďve young Günter does have is a head for heights and, ever since he visited a glassblower's workshop as a child, an unusual fixation with glass. When a minor adventure up the spire of Salisbury Cathedral makes Günter a local celebrity, John Blades - window-cleaner to the stars - comes calling. He wants Günter to join him in London to clean Europe's tallest skyscraper, the newly constructed Shard in London Bridge.

With his mother recently passed away, his dad retired and no money to pay off the mortgage, Günter takes Blades up on his offer and soon finds himself, for the first time, among the bright lights of London. He has his first experience of romantic love with short-range psychic Lieve Toureau, tries not to encourage Blades' frequent racist outbursts, and cohabits a Hackney 'bachelor-pad' with a reclusive landlord who has spent decades writing a never-ending book in his cork-lined bedroom. But above all, Günter spends his time trying to figure out how to be good and follow his dear departed mother's advice as best he can.

Will Günter find his way along the straight and narrow? Or will his innocence put him on collision course with the frequently baffling modern world?

Descripción Paperback. Condición: Very Good. The book has been read, but is in excellent condition. Pages are intact and not marred by notes or highlighting. The spine remains undamaged. Nş de ref. del artículo: GOR006447135

Descripción Hardcover. Condición: Used; Good. **Simply Brit** Shipped with Premium postal service within 24 hours from the UK with impressive delivery time. We have dispatched from our book depository; items of good condition to over ten million satisfied customers worldwide. We are committed to providing you with reliable and efficient service at all times. Nş de ref. del artículo: 2459864

Descripción Hardcover. Condición: Used; Good. **SHIPPED FROM UK** We believe you will be completely satisfied with our quick and reliable service. All orders are dispatched as swiftly as possible! Buy with confidence!. Nş de ref. del artículo: 1965039

Descripción Hardcover. Condición: Very Good. Glass This book is in very good condition and will be shipped within 24 hours of ordering. The cover may have some limited signs of wear but the pages are clean, intact and the spine remains undamaged. This book has clearly been well maintained and looked after thus far. Money back guarantee if you are not satisfied. See all our books here, order more than 1 book and get discounted shipping. . Nş de ref. del artículo: 7719-9781846689673

Descripción Hardcover. Condición: Very Good. Shipped within 24 hours from our UK warehouse. Clean, undamaged book with no damage to pages and minimal wear to the cover. Spine still tight, in very good condition. Remember if you are not happy, you are covered by our 100% money back guarantee. Nş de ref. del artículo: 6545-9781846689673