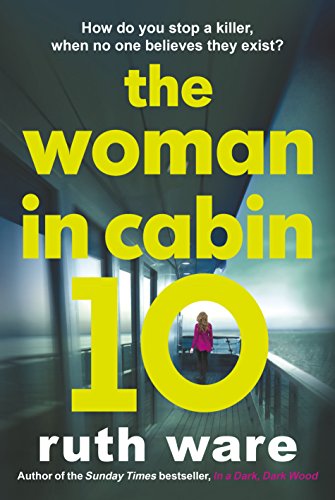 THE TOP TEN BESTSELLERFrom the bestselling author of Richard and Judy pick, In A Dark, Dark Wood comes Ruth Ware's next compulsive page-turner 'A rollicking page-turner that reads like Agatha Christie got together with Paula Hawkins to crowdsource a really fun thriller' - StylistThis was meant to be the perfect trip. The Northern Lights. A luxury press launch on a boutique cruise ship., A chance for travel journalist Lo Blacklock to recover from a traumatic break-in that has left her on the verge of collapse, and to work out what she wants from her relationship. Except things don't go as planned. Woken in the night by screams, Lo rushes to her window to see a body thrown overboard from the next door cabin., But the records show that no-one ever checked into that cabin, and no passengers are missing from the boat. Exhausted, emotional and increasingly desperate, Lo has to face the fact that she may have made a terrible mistake. Or she is trapped on a boat with a murderer - and she is the sole witness...

"Agatha Christie meets The Girl on the Train in this stupendously good read... Scary and unsettling, it’s edge-of-your-seat stuff" (Sun on Sunday)

"A tense, moody drama set on a press trip that goes horribly wrong... Ware has produced a fantastic variation on the woman-in-peril theme, with a plucky protagonist and a brilliantly claustrophobic setting" (Joan Smith Sunday Times)

"A fantastic read. A fog-enshrouded cruise ship, a twisty puzzle of a murder mystery reminiscent of Agatha Christie, and unrelenting suspense. Batten down the hatches and prepare to read it in one sitting!" (Shari Lapena, author of The Couple Next Door)

"[It] channels Agatha Christie’s murders at sea in a satisfying contemporary direction." (Mark Lawson Guardian, Book of the Year)

"This atmospheric thriller will have you gripped " (Closer)

"Ware's virtues are gloriously old-fashioned: an ability to combine a sense of menace with the lightness of touch...and sharp prose." (Sunday Express)

"I absolutely swallowed it whole; she takes that classic golden-age premise of a locked room and turns it into something completely right for the twenty-first century" (Erin Kelly)

Ruth Ware is an international number one bestseller. Her first two thrillers, In a Dark, Dark Wood and The Woman in Cabin 10, were smash hits and appeared on bestseller lists around the world, including the Sunday Times and New York Times. The film rights to both books have been optioned and she is published in more than 40 languages. Ruth lives near Brighton with her family.

Visit www.ruthware.com to find out more.

Descripción Harvill Secker, 2016. Hardcover. Condición: Good. All orders are dispatched the following working day from our UK warehouse. Established in 2004, we have over 500,000 books in stock. No quibble refund if not completely satisfied. Nş de ref. del artículo: mon0004908223

Descripción Harvill Secker, 2016. Hardcover. Condición: Very Good. Very Good: a copy that has been read, but is in excellent condition. Pages are intact and not marred by notes or highlighting. The spine remains undamaged. Most items will be dispatched the same or the next working day. Nş de ref. del artículo: wbb0014377617

Descripción Harvill Secker, 2016. Hardcover. Condición: Very Good. The Woman in Cabin 10 This book is in very good condition and will be shipped within 24 hours of ordering. The cover may have some limited signs of wear but the pages are clean, intact and the spine remains undamaged. This book has clearly been well maintained and looked after thus far. Money back guarantee if you are not satisfied. See all our books here, order more than 1 book and get discounted shipping. . Nş de ref. del artículo: 7719-9781846558900

Descripción Harvill Secker 30/06/2016, 2016. Hardcover. Condición: Very Good. Shipped within 24 hours from our UK warehouse. Clean, undamaged book with no damage to pages and minimal wear to the cover. Spine still tight, in very good condition. Remember if you are not happy, you are covered by our 100% money back guarantee. Nş de ref. del artículo: 6545-9781846558900

Descripción Paperback. Condición: Very Good. The book has been read, but is in excellent condition. Pages are intact and not marred by notes or highlighting. The spine remains undamaged. Nş de ref. del artículo: GOR007411842

Descripción Harvill Secker, 2016. Condición: Good. Ships from the UK. Former Library book. Shows some signs of wear, and may have some markings on the inside. Nş de ref. del artículo: GRP93895467