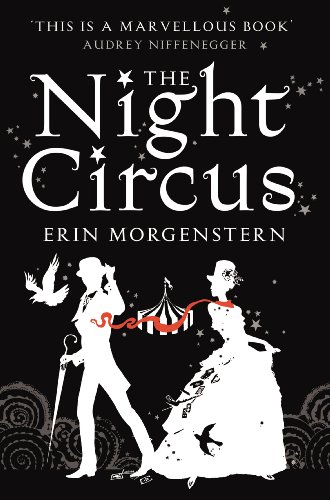 "The Night Circus made me happy. Playful and intensely imaginative, Erin Morgenstern has created the circus I have always longed for. This is a marvelous book" (Audrey Niffenegger, author of The Time Traveler's Wife)

"The Night Circus pulls you into a world as dark as it is dazzling, fully-realized but still something out of a dream. You will not want to leave it" (Téa Obreht, author of The Tiger’s Wife)

"Pure pleasure... Erin Morgenstern is a gifted, classic storyteller, a tale-teller, a spinner of the charmed and mesmerizing - I had many other things I was supposed to be doing, but the book kept drawing me back in and I tore through it. You can be certain this riveting debut will create a group of rêveurs all its own" (Aimee Bender, author of The Particular Sadness of Lemon Cake)

"Every once in awhile you find a novel so magical that there is no escaping its spell. The Night Circus is one of these rarities - engrossing, beautifully written and utterly enchanting. If you choose to read just one novel this year, this is it" (Danielle Trussoni, author of Angelology)

"'Dark as soot and bright as sparks,' The Night Circus still holds me willingly captive in a world of almost unbearable beauty. This is a love story on a grand scale: it creates, it destroys, it ultimately transcends. Take a bow, Erin Morgenstern. This is one of the best books I have ever read" (Brunonia Barry, author of The Lace Reader)

In 1886, a mysterious travelling circus becomes an international sensation. Open only at night, constructed entirely in black and white, Le Cirque des Rêves delights all who wander its circular paths and warm themselves at its bonfire.

Although there are acrobats, fortune-tellers and contortionists, the Circus of Dreams is no conventional spectacle. Some tents contain clouds, some ice. The circus seems almost to cast a spell over its aficionados, who call themselves the rêveurs - the dreamers. At the heart of the story is the tangled relationship between two young magicians, Celia, the enchanter's daughter, and Marco, the sorcerer's apprentice. At the behest of their shadowy masters, they find themselves locked in a deadly contest, forced to test the very limits of the imagination, and of their love...

A fabulous, fin-de-siècle feast for the senses and a life-affirming love story, The Night Circus is a captivating novel that will make the real world seem fantastical and a fantasy world real.

Descripción Harvill Secker, 2011. Hardcover. Condición: New. Estado de la sobrecubierta: Fine. 1st Edition. 1st edition, 1st Printing UK HB. Signed lined and Dated to the title page by the author. Complete with promotional fold out card available on the release events. In very fine collectable condition. Protected Dust Jacket. Also a fine signed copy of The Starless Sea with protected dust jacket. Packed professionally in a twin walled box with much protection internally. International buyers we will send the book by signed for International courier because of the value of this rare edition and speed of arrival with the USA and Canada's internal postal service in disarray 5 days instead of 8 weeks currently (Aug 2020). Signed by Author(s). Nş de ref. del artículo: 1517