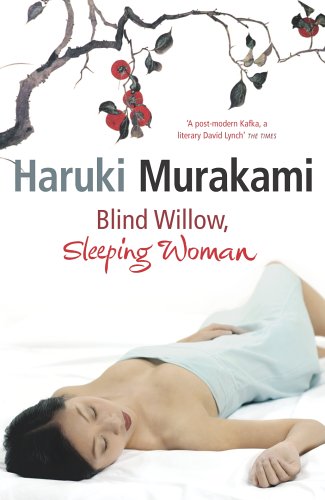 A young man accompanies his cousin to the hospital to check an unusual hearing complaint and recalls a story of a woman put to sleep by tiny flies crawling inside her ear; a mirror appears out of nowhere and a nightwatchman is unnerved as his reflection tries to take control of him; a couple's relationship is unbalanced after dining exclusively on exquisite crab while on holiday; a man follows instructions on the back of a postcard to apply for a job, but an unknown password stands between him and his mysterious employer. In each one of these stories, Murakami sidesteps the real and sprints for the surreal. Everyday events are transcended, leaving the reader dazzled by this master of his craft. "Blind Willow, Sleeping Woman" is Murakami's most eclectic collection of stories to date, spanning five years of his writing. An introduction explains the diversity of the author's choice.

Haruki Murakami was born in Kyoto in 1949. Following the publication of his first novel in Japanese in 1979, he sold the jazz bar he ran with his wife and became a full-time writer. It was with the publication of Norwegian Wood -- which has to date sold more than 4 million copies in Japan alone -- that the author was truly catapulted into the limelight. Known for his surrealistic world of mysterious (and often disappearing) women, cats, earlobes, wells, Western culture, music and quirky first-person narratives, he is now Japan's best-known novelist abroad. Eight novels, two short story collections and one work of non-fiction are currently available in English translation. Stories translated by Jay Rubin and Philip Gabriel