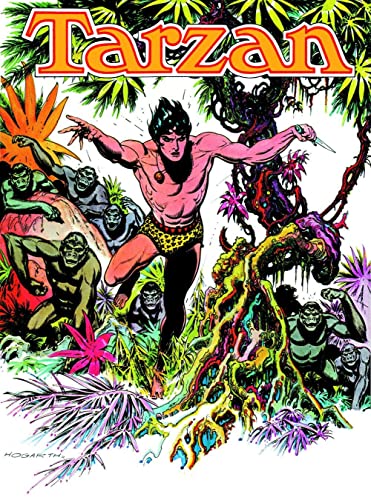 One of the most influential illustrators ever adapts two of Edgar Rice Burroughs' most beloved Tarzan novels! Burne Hogarth's color Tarzan of the Apes and black-and-white Jungle Tales of Tarzan graphic novels are collected into one deluxe hardcover. Hogarth (Dynamic Anatomy) shines in these lively, lush, and faithful Tarzan adaptations!

One of the most influential and revered illustrators ever adapts two of Edgar Rice Burroughs’ most beloved Tarzan novels! Burne Hogarth’s color Tarzan of the Apes and black-and-white Jungle Tales of Tarzan graphic novels are finally collected into one deluxe hardcover. After his inspirational run drawing Tarzan Sunday newspaper strips and before his landmark instructional art books changed the industry forever, Burne Hogarth (Dynamic Anatomy, Dynamic Figure Drawing, and others) dazzled the world with these remarkably lively, complex, and faithful adaptations of Burroughs’ legendary lord of the jungle!. NOTA: El libro no está en español, sino en inglés.

Burne Hogarth's (1911–1996) remarkable career spanned more than 60 years. He wore many hats in the worlds of fine art, art education, and art publishing. He is most famous for his internationally syndicated Sunday newspaper color-page feature Tarzan (1937–1950) and for his illustrated adaptations of the Edgar Rice Burroughs novels Tarzan of the Apes and Jungle Tales of Tarzan. A cofounder of the School of Visual Arts in New York City, Hogarth remains one of the most influential figures in art education today.

Edgar Rice Burroughs (1875–1950) was a fantasy and science fiction writer. After a failed attempt at a military career, Burroughs became a writer, publishing his first story Under the Moons of Mars. Burroughs is responsible for creating one of the most recognizable characters in the history of fiction in Tarzan, and one of the most iconic characters in sci-fi with John Carter. In total, Burroughs published more than thirty works during his lifetime.