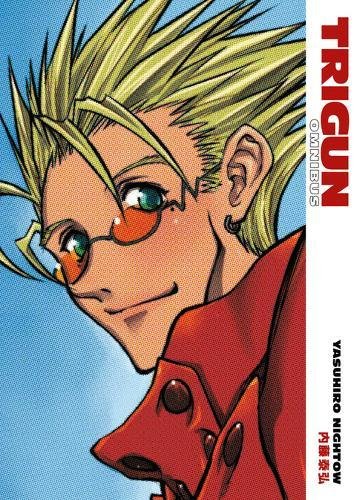 Meet Vash the Stampede, the galaxy's deadliest and most wanted man. Every bounty hunter aims to claim Vash dead or alive-preferably dead!-and though Vash is a pacifist, he won't go down without a fight. Collecting both Trigun volumes, Trigun Omnibus features nearly 700 pages of Yasuhiro Nightow's signature creation!

On the forbidding desert planet of Gunsmoke, a sixty billion double-dollar bounty hangs over the head of Vash the Stampede, a pistol-packing pacifist with a weapon capable of punching holes in a planet. Every trigger-happy psycho in creation is aiming to claim Vash dead or alive - preferably dead!-and although Vash is an avowed pacifist, he won't go down without a fight. And when Vash fights, destruction is sure to follow! Yasuhiro Nightow's Trigun is a worldwide sensation, and Trigun Omnibus collects both Trigun volumes in one value-priced package, nearly 700 pages of Nightow's signature creation!

Yasuhiro Nightow is a Japanese manga artist and game creator who created the anime and manga Trigun. Nightow was born on April 8, 1967, in Yokohama, Japan. He moved to Yokosuka when he was in elementary school and spent his junior high and high school years in Shizuoka.

Before the release of the popular manga Trigun, Nightow studied social science and then majored in media studies. Nightow became popular in the United States thanks to the US release of Trigun. Trigun, the TV series, had a limited broadcast run in 1998. Nightow also created the characters and story for the Sega/Red Entertainment anime and third-person shooter video game series Gungrave. The author lives in Tokyo, Japan.