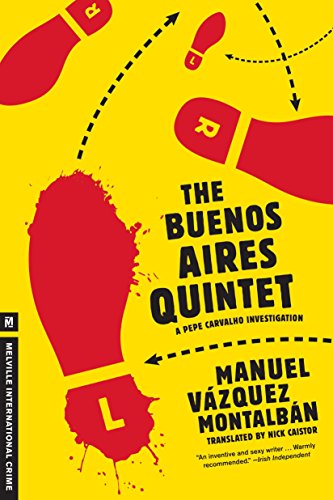 "Montalbán does for Barcelona what Chandler did for Los Angeles-- he exposes the criminal power relationships beneath the façade of democracy."
-- THE GUARDIAN

"What's not to like about a detective who, at the end of a hard day's sleuthing, rustles up a duck ragout at 1 in the morning and then sits down to eat it?" -- THE DAILY BEAST

"A writer who is caustic about the powerful and tender towards the oppressed."
-- TIMES LITERARY SUPPLEMENT "Carvalho travels down the mean calles with humor, perception, and compassion."
-- THE TIMES (LONDON) "Does for modern Barcelona what Dickens did for 19th century London."
--TOTAL "Carvalho is funny . . . scathingly witty about the powerful. He is an original eccentric, burning books and cooking all night. Like Chandler's Phillip Marlowe, he is a man of honor walking the mean streets of a sick society."
-- THE INDEPENDENT (LONDON) "A sharp wit and a knowing eye."
-- SUNDAY TIMES (LONDON) Reseńa del editor:

Assignment: Finding one of Argentina's 30,000 "Disappeared" ... likely outcome: Becoming one yourself.
The Argentine army's "Dirty War" disappeared 30,000 people, and the last thing Pepe Carvalho wants is to investigate one of the vanished, even if that missing person is his cousin. But blood proves thicker than a fine Mendoza Cabernet Sauvignon, even for a jaded gourmand like Pepe, and so at his family's request he leaves Barcelona for Buenos Aires.

What follows is perhaps Manuel Vázquez Montalbán's masterpiece: a combination white-knuckle investigation and moving psychological travelogue. Pepe quickly learns that "Buenos Aires is a beautiful city hell-bent on self-destruction," and finds himself on a trail involving boxers and scholars, military torturers and seductive semioticians, Borges fans and cold-blooded murderers.

And despite the wonders of the Tango and the country's divine cuisine, he also knows one thing: He'll have to confront the traumas of Argentina's past head on if he wants not only to find his cousin, but simply stay alive.