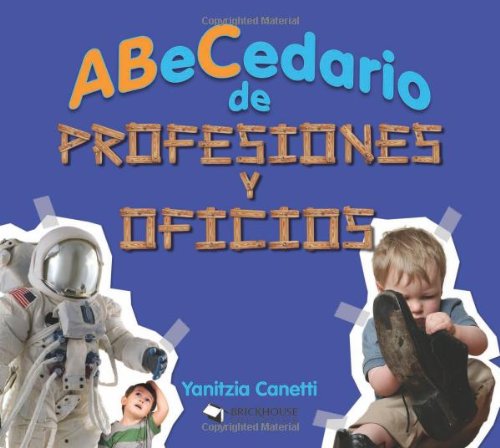 From “astronauta” to “zapatero,” the children in this book want to have the most amazing jobs! The rhyming text and adorable photographs make learning the letters of the alphabet and their sounds easy and entertaining. Children will also enjoy finding out what each job involves. Includes a glossary and four pages of fun facts about the jobs mentioned in the text.

Yanitzia Canetti is an award-winning children's book author, novelist, and translator. With more than 100 books translated, Canetti has introduced Spanish speakers around the world to many children's literature classics, including the Dr. Seuss series (for which she is the Official Spanish Translator), Curious George and other works by H.A. Rey, Amelia Bedelia, The Berenstain Bears, and First Lady Laura Bush and daughter Jenna Bush s recent book, Read All About It.In the field of education, Canetti has written and adapted fiction and nonfiction series, teacher's guides, student editions, ancillary texts, and many other educational materials. She has also authored English, Spanish-language, and bilingual programs published by Houghton Mifflin and Harcourt, among other educational publishers.Yanitzia Canetti fell in love with New England when she first visited in autumn, and the always-changing seasons often provide inspiration for her writing. She currently resides in Massachusetts with her husband and two young sons.

Descripción BrickHouse Education. Paperback. Condición: GOOD. Spine creases, wear to binding and pages from reading. May contain limited notes, underlining or highlighting that does affect the text. Possible ex library copy, thatâ ll have the markings and stickers associated from the library. Accessories such as CD, codes, toys, may not be included. Nş de ref. del artículo: 3081122480

Descripción BrickHouse Education, 2010. Condición: Good. A+ Customer service! Satisfaction Guaranteed! Book is in Used-Good condition. Pages and cover are clean and intact. Used items may not include supplementary materials such as CDs or access codes. May show signs of minor shelf wear and contain limited notes and highlighting. Nş de ref. del artículo: 1598351222-2-4