Artículos relacionados a This Is How You Lose Her - Deluxe Edition

This Is How You Lose Her - Deluxe Edition

This Is How You Lose Her - Deluxe Edition 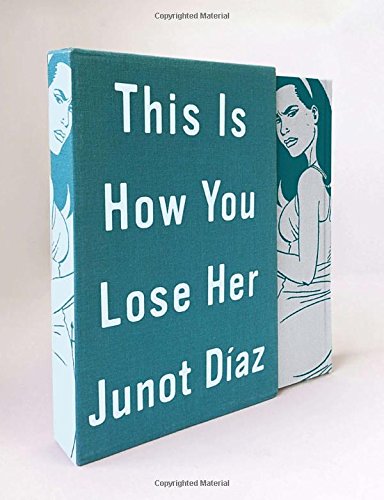 Finalist for the 2012 National Book Award
Winner of the Sunday Times Short Story Award
A Time and People Top 10 Book of 2012
Finalist for the 2012 Story Prize
Chosen as a notable or best book of the year by The New York Times, Entertainment Weekly, The LA Times, Newsday, Barnes & Noble, Amazon, the iTunes bookstore, and many more...

"Junot Díaz writes in an idiom so electrifying and distinct it's practically an act of aggression, at once enthralling, even erotic in its assertion of sudden intimacy... [It is] a syncopated swagger-step between opacity and transparency, exclusion and inclusion, defiance and desire... His prose style is so irresistible, so sheerly entertaining, it risks blinding readers to its larger offerings. Yet he weds form so ideally to content that instead of blinding us, it becomes the very lens through which we can see the joy and suffering of the signature Díaz subject: what it means to belong to a diaspora, to live out the possibilities and ambiguities of perpetual insider/outsider status." -The New York Times Book Review "Nobody does scrappy, sassy, twice-the-speed of sound dialogue better than Junot Díaz. His exuberant short story collection, called This Is How You Lose Her, charts the lives of Dominican immigrants for whom the promise of America comes down to a minimum-wage paycheck, an occasional walk to a movie in a mall and the momentary escape of a grappling in bed." -Maureen Corrigan, NPR "Exhibits the potent blend of literary eloquence and street cred that earned him a Pulitzer Prize... Díaz's prose is vulgar, brave, and poetic." -O Magazine "Searing, irresistible new stories... It's a harsh world Díaz conjures but one filled also with beauty and humor and buoyed by the stubborn resilience of the human spirit." -People "Junot Díaz has one of the most distinctive and magnetic voices in contemporary fiction: limber, streetwise, caffeinated and wonderfully eclectic... The strongest tales are those fueled by the verbal energy and magpie language that made Brief Wondrous Life so memorable and that capture Yunior's efforts to commute between two cultures, Dominican and American, while always remaining an outsider." -Michiko Kakutani, The New York Times "These stories... are virtuosic, command performances that mine the deceptive, lovelorn hearts of men with the blend of tenderness, comedy and vulgarity of early Philip Roth. It's Díaz's voice that's such a delight, and it is every bit his own, a melting-pot pastiche of Spanglish and street slang, pop culture and Dominican culture, and just devastating descriptive power, sometimes all in the same sentence." -USA Today "Impressive... comic in its mopiness, charming in its madness and irresistible in its heartfelt yearning." -The Washington Post "The dark ferocity of each of these stories and the types of love it portrays is reason enough to celebrate this book. But the collection is also a major contribution to the short story form... It is an engrossing, ambitious book for readers who demand of their fiction both emotional precision and linguistic daring." -NPR "The centripetal force of Díaz's sensibility and the slangy bar-stool confidentiality of his voice that he makes this hybridization feel not only natural and irresistible, but inevitable, the voice of the future... [This is How You Lose Her] manages to be achingly sad and joyful at the same time. Its heart is true, even if Yunior's isn't." -Salon "[A] propulsive new collection... [that] succeeds not only because of the author's gift for exploring the nuances of the male... but because of a writing style that moves with the rhythm and grace of a well-danced merengue." -Seattle Times

"In Díaz's magisterial voice, the trials and tribulations of sex-obsessed objectifiers become a revelation." -The Boston Globe "Scooch over, Nathan Zuckerman. New Jersey has bred a new literary bad boy... A." -Entertainment Weekly "Ribald, streetwise, and stunningly moving--a testament, like most of his work, to the yearning, clumsy ways young men come of age." -Vogue "[An] excellent new collection of stories... [Díaz is] an energetic stylist who expertly moves between high-literary storytelling and fizzy pop, between geek culture and immigrant life, between romance and high drama." -IndieBound "Taken together, [these stories'] braggadocio softens into something much more vulnerable and devastating. The intimacy and immediacy... is not just seductive but downright conspiratorial... A heartbreaker." -The Daily Beast "Díaz manages a seamless blend of high diction and low, of poetry and vulgarity... Look no further for home truths on sex and heartbreak." -The Economist "This collection of stories, like everything else [Díaz has] written, feels vital in the literal sense of the word. Tough, smart, unflinching, and exposed, This is How You Lose Her is the perfect reminder of why Junot Díaz won the Pulitzer Prize... [He] writes better about the rapid heartbeat of urban life than pretty much anyone else." -The Christian Science Monitor "Filled with Díaz's signature searing voice, loveable/despicable characters and so-true-it-hurts goodness." -Flavorwire "Díaz writes with subtle and sharp brilliance... He dazzles us with his language skills and his story-making talents, bringing us a narrative that is starkly vernacular and sophisticated, stylistically complex and direct... A spectacular read." -Minneapolis Star-Tribune "[This is How You Lose Her] has maturity in content, if not in ethical behavior... Díaz's ability to be both conversational and formal, eloquent and plainspoken, to say brilliant things Trojan-horsed in slang and self-deprecation, has a way of making you put your guard completely down and be effected in surprising and powerful ways." -The Rumpus "As tales of relationship redemption go, each of the nine relatable short stories in Junot Díaz's consummate collection This Is How You Lose Her triumphs... Through interrogative second-person narration and colloquial language peppered with Spanish, the Pulitzer Prize-winning author authentically captures Junior's cultural and emotional dualities." -Metro "Searing, sometimes hilarious, and always disarming... Readers will remember why everyone wants to write like Díaz, bring him home, or both. Raw and honest, these stories pulsate with raspy ghetto hip-hop and the subtler yet more vital echo of the human heart." -Publishers Weekly (starred review) "Díaz's standout fiction remains pinpoint, sinuous, gutsy, and imaginative... Each taut tale of unrequited and betrayed love and family crises is electric with passionate observations and off-the-charts emotional and social intelligence... Fast-paced, unflinching, complexly funny, street-talking tough, perfectly made, and deeply sensitive, Díaz's gripping stories unveil lives shadowed by prejudice and poverty and bereft of reliable love and trust. These are precarious, unappreciated, precious lives in which intimacy is a lost art, masculinity a parody, and kindness, reason, and hope struggle to survive like seedlings in a war zone." -Booklist (starred review) "Díaz's third book is as stunning as its predecessors. These stories are hard and sad, but in Díaz's hands they also crackle." -Library Journal (starred review) "Magnificent... an exuberant rendering of the driving rhythms and juicy Spanglish vocabulary of immigrant speech... sharply observed and morally challenging." -Kirkus "A beautifully stirring look at ruined relationships and lost love--and a more than worthy follow-up to [Díaz's] 2007 Pulitzer winner, The Brief Wondrous Life of Oscar Wao." -Bookpage "In This Is How You Lose Her, Díaz writes with subtlety and grace, once again demonstrating his remarkable facility for developing fully-realized and authentic characters with an economical rawness... Díaz skillfully portrays his protagonist so vividly, and with so much apparent honesty, that Yunior's voice comes across with an immediacy that never once feels inauthentic." -California Literary Review "Díaz continues to dazzle with his dynamite, street-bruised wit. The bass line of this collection is a thumpingly raw and sexual foray into lives that claw against poverty and racism. It is a wild rhythm that makes more vivid the collection's heart-busted steadiness." -Dallas Morning News Reseńa del editor:

A major New York Times bestseller and a finalist for the National Book Award, This Is How You Lose Her is Pulitzer Prize-winner Junot Díaz’s celebration of love in all its facets?obsessive love, illicit love, fading love, maternal love. For this gorgeous new edition, Jaime Hernandez?deemed ?one of the twentieth century’s most significant comic creators”?has crafted stunning full-page illustrations, one for each story, that brilliantly capture the love-haunted spirit of the book and of the gutsy women whom irrepressible, irresistible Yunior loves and loses. A true work of art, inside and out, this is a keepsake that fans will treasure and new readers will delight in discovering.

1. This Is How You Lose Her Deluxe Edition

2. This Is How You Lose Her Deluxe Edition

Descripción Riverhead Books, United States, 2013. Book. Condición: New. Jaime Hernandez Ilustrador. Deluxe ed. Language: English. Brand new Book. A must-have collector's edition of Junot Díaz's bestseller and National Book Award finalist, brilliantly illustrated by celebrated comic artist Jaime Hernandez A major New York Times bestseller and a finalist for the National Book Award, This Is How You Lose Her is Pulitzer Prize-winner Junot Díaz's celebration of love in all its facets--obsessive love, illicit love, fading love, maternal love. For this gorgeous new edition, Jaime Hernandez--deemed "one of the twentieth century's most significant comic creators"--has crafted stunning full-page illustrations, one for each story, that brilliantly capture the love-haunted spirit of the book and of the gutsy women whom irrepressible, irresistible Yunior loves and loses. A true work of art, inside and out, this is a keepsake that fans will treasure and new readers will delight in discovering. Nş de ref. del artículo: BTE9781594632853

4. This Is How You Lose Her (Deluxe Edition)

5. This Is How You Lose Her Deluxe Edition

6. This Is How You Lose Her Deluxe Edition