Artículos relacionados a One Monster After Another (Little Monster)

Mayer, Mercer One Monster After Another (Little Monster)

One Monster After Another (Little Monster) 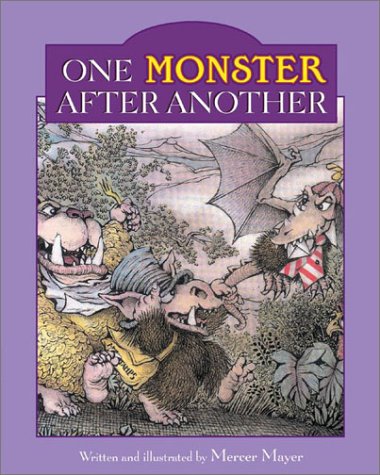 If you open almost any of award-winning author/illustrator Mercer Mayer’s 250+ children’s books you’ll see dragons, cuddly monsters, wonderful creatures, and endearing critters. Born in Little Rock, Arkansas, Mr. Mayer spent his childhood hunting lizards and snakes in the swamps by his home. During his teenage years, he lived in Hawaii where he attended the Honolulu Academy of Arts. He later received additional training at the Art Students League in New York City. Upon completion of his studies he set out with pen and ink to write and illustrate adventures he experienced as a child.

1. One Monster after Another

Descripción Hardcover. Condición: Very Good. Mayer, Mercer Ilustrador. Item is in very good condition. If supplemental codes/CDs for textbooks are required please contact us prior to purchasing as they may be missing. Photos are stock pictures and not of the actual item. Nş de ref. del artículo: DS-1577686888-2