Artículos relacionados a War Against the Weak: Eugenics and America's Campaign...

Black, Edwin War Against the Weak: Eugenics and America's Campaign to Create a Master Race

War Against the Weak: Eugenics and America's Campaign to Create a Master Race 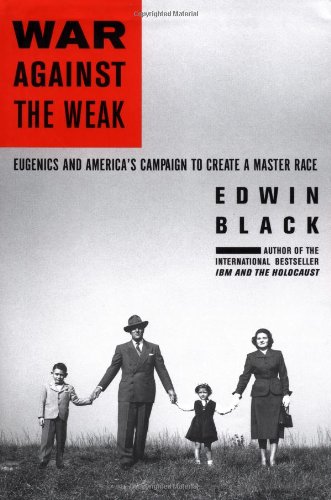 Genetics is in the news. What is not in the news are its origins in a racist twentieth century pseudoscience called eugenics, which was based on selective breeding. In 1904, the United States launched a large-scale eugenics movement that was championed by the medical, political and religious elite. History has recorded the horrors of ethnic cleansing, but until now, America's own efforts to create a master race have been largely overlooked. In War Against The Weak, investigative journalist, Edwin Black, reveals that eugenics had an incredible foothold in America in the early twentieth century, and was in fact championed and funded by America's social, political, and academic elite. Even more shocking, Black traces the flow of ideas, research, and money from Cold Spring Harbor (Long Island) to Germany, in the process proving that it was America's eugenics programme that gave Hitler the scientific justification to escalate his virulent anti-Semitism into all-out genocide.

Edwin Black is the award-winning author of IBM and the Holocaust, which was published in the UK by Little Brown and has sold over 25,000 copies in hardback alone. It won the American Society of Journalists' and Authors' Award for best non-fiction book of 2002. As an investigative journalist, he has written for numerous papers and magazines including The Sunday Times, Washington Post, Los Angeles Times and Jerusalem Post.

1. War Against the Weak: Eugenics and America's Campaign to Create a Master Race