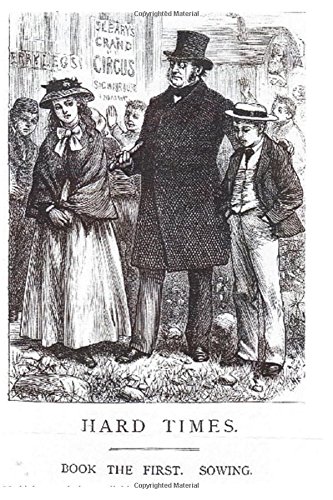 Hard Times is unusual in several respects. It is by far the shortest of Dickens' novels, barely a quarter of the length of those written immediately before and after it. Also, unlike all but one of his other novels, Hard Times has neither a preface nor illustrations. Moreover, it is his only novel not to have scenes set in London. Instead the story is set in the fictitious Victorian industrial Coketown, a generic Northern English mill-town, in some ways similar to Manchester, though smaller. Coketown may be partially based on 19th-century Preston.One of Dickens's reasons for writing Hard Times was that sales of his weekly periodical, Household Words, were low, and it was hoped the novel's publication in instalments would boost circulation – as indeed proved to be the case. Since publication it has received a mixed response from critics. Critics such as George Bernard Shaw and Thomas Macaulay have mainly focused on Dickens's treatment of trade unions and his post–Industrial Revolution pessimism regarding the divide between capitalist mill owners and undervalued workers during the Victorian era. F. R. Leavis, a great admirer of the book, included it — but not Dickens' work as a whole — as part of his Great Tradition of English novels.

Charles John Huffam Dickens (7 February 1812 – 9 June 1870) was an English writer and social critic. He created some of the world's best-known fictional characters and is regarded by many as the greatest novelist of the Victorian era.[1] His works enjoyed unprecedented popularity during his lifetime, and by the twentieth century critics and scholars had recognised him as a literary genius. His novels and short stories enjoy lasting popularity. Born in Portsmouth, Dickens left school to work in a factory when his father was incarcerated in a debtors' prison. Despite his lack of formal education, he edited a weekly journal for 20 years, wrote 15 novels, five novellas, hundreds of short stories and non-fiction articles, lectured and performed extensively, was an indefatigable letter writer, and campaigned vigorously for children's rights, education, and other social reforms. Dickens was regarded as the literary colossus of his age.[9] His 1843 novella, A Christmas Carol, remains popular and continues to inspire adaptations in every artistic genre. Oliver Twist and Great Expectations are also frequently adapted, and, like many of his novels, evoke images of early Victorian London. His 1859 novel, A Tale of Two Cities, set in London and Paris, is his best-known work of historical fiction. Dickens's creative genius has been praised by fellow writers—from Leo Tolstoy to George Orwell and G. K. Chesterton—for its realism, comedy, prose style, unique characterisations, and social criticism. On the other hand, Oscar Wilde, Henry James, and Virginia Woolf complained of a lack of psychological depth, loose writing, and a vein of saccharine sentimentalism. The term Dickensian is used to describe something that is reminiscent of Dickens and his writings, such as poor social conditions or comically repulsive characters.