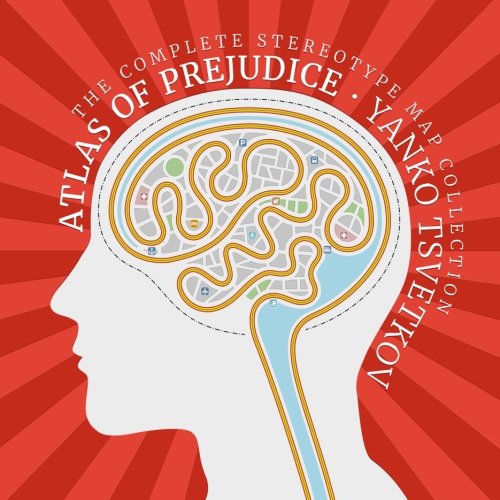 More than a hundred stereotype maps glazed with exquisite human prejudice, especially collected for you by Yanko Tsvetkov, author of the viral Mapping Stereotypes project.

Satire and cartography rarely come in a single package but in the Atlas of Prejudice they successfully blend in a work of art that is both funny and thought-provoking. A reliable weapon against bigots of all kinds, it serves as an inexhaustible source of much needed argumentation and—occasionally—as a nice slab of paper that can be used to smack them across the face whenever reasoning becomes utterly impossible.

This second edition packs the most extensive collection of Tsvetkov’s maps to date in a single book suitable for all ages, genders, and races.

Yanko Tsvetkov is a Bulgarian artist who lives in Spain, writes in English, and publishes books in Germany, France, Russia, Turkey, Italy, and China. He has visited several continents, passed through thick jungles, picnicked in scorching deserts, and booked a few taxis in busy metropolises. Today he leads a second life as a superhero that fights prejudice with his giant laser and his gorgeous cape. His distaste for writing autobiographical notes is a well-guarded secret.

Descripción CreateSpace Independent Publishing Platform 2016-10-04, 2016. Paperback. Condición: Good. Item is in good condition. Some moderate creases and wear. This item may not come with CDs or additional parts including access codes for textbooks. Might be an ex-library copy and contain writing/highlighting. Photos are stock pictures and not of the actual item. Nş de ref. del artículo: DS-1539027015-3