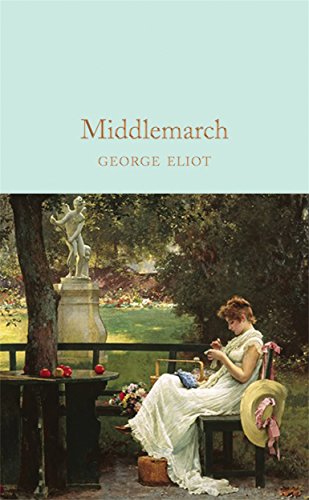 Designed to appeal to the booklover, the Macmillan Collector's Library is a series of beautiful gift editions of much loved classic titles. Macmillan Collector's Library are books to love and treasure. This edition features an introduction by Pulitzer Prize-winning novelist Jennifer Egan. Dorothea Brooke is a beautiful and idealistic young woman set on filling her life with good deeds. She pursues the pompous Edward Casuabon, convinced that he embodies these principles, and becomes trapped in an unhappy marriage. Then there is Tertius Lydgate, an anguished progressive whose determination to bring modern medicine to the provinces is muddied by unrequited love. They, and a multitude of other brilliantly drawn characters, reside in the town Middlemarch - the background to George Eliot's incomparable portrait of Victorian life. An eternal masterpiece of candid observation, emotional insight and transcending humour, Middlemarch is a truly monumental novel.

George Eliot was born Mary Ann Evans in 1819. Her father was the land agent of Arbury Hall in Warwickshire, in the library of which Eliot embarked upon a brilliant self-education. She moved to London in 1850 and shone in its literary circles. It was, however, her novels of English rural life that brought her fame, starting with Adam Bede, published under her new pen-name in 1859. She went on to publish novels including The Mill on the Floss in 1860 and Middlemarch in 1871 as well as poetry and nonfiction of which Queen Victoria was one of her most devoted readers. She died in 1880.