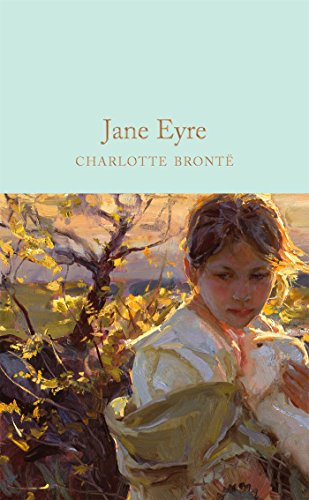 The orphaned Jane Eyre is no beauty but her plain appearance belies an indomitable spirit, sharp wit and great courage. As a child she suffers under cruel guardians, harsh schooling and a rigid social order but when she goes to Thornfield Hall to work as a governess for the mysterious Mr Rochester, the stage is set for one of literature's most enduring romances. A beloved classic and undisputed masterpiece, Charlotte Bronte's Jane Eyre explores class, society, love and religion through the eyes of one of fiction's most unique and memorable female protagonists.This beautiful Macmillan Collector's Library edition features an afterword by Sam Gilpin.Designed to appeal to the booklover, the Macmillan Collector's Library is a series of beautiful gift editions of much loved classic titles., Macmillan Collector's Library are books to love and treasure.

'Reader, I married him.'

Charlotte Bronte was born in Yorkshire in 1816. She was the third of six children and the elder sister of fellow novelists Emily and Anne. She worked as a governess, and then briefly taught in Brussels before returning in 1846 to the Haworth parsonage of her childhood, where she and her younger sisters published poems under the pseudonyms Currer, Ellis and Acton Bell. In 1847 she completed Jane Eyre, which was published to considerable acclaim. Charlotte married in 1854 and died in 1855.