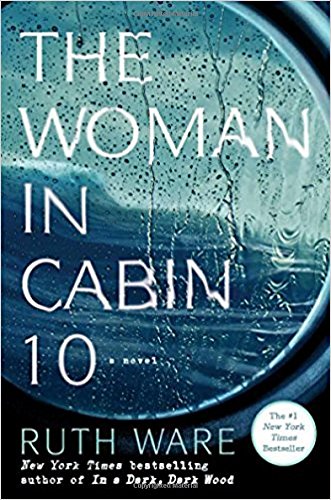 "Lots of twists and surprises in an old-fashioned mystery."--R.L. Stine "Thrillist "

"A classic "paranoid woman" story with a modern twist in this tense, claustrophobic mystery...The cast of characters, their conversations, and the luxurious but confining setting all echo classic Agatha Christie; in fact, the structure of the mystery itself is an old one: a woman insists murder has occurred, everyone else says she's crazy. But Lo is no wallflower; she is a strong and determined modern heroine who refuses to doubt the evidence of her own instincts."--Kirkus Reviews

"Ruth Ware is back with her second hair-on-the-back-of-your-neck-tingling tale."--Marie Claire

"[The Woman in Cabin 10] generate[s] a dark, desperate tension that will appeal to Ware's and Gillian Flynn's many fans. This is the perfect summer read for those seeking a shadowy counter to the sunshine."--Booklist, Starred Review

"A fantasy trip aboard a luxury liner turns nightmarish for a young journalist in The Woman in Cabin 10, the pulse-quickening new novel by Ruth Ware, author of In a Dark, Dark Wood."--O Magazine

"[A] snappy thriller set on the high seas... The first chapter will grab your attention, force it against a wall and hold it there until the end."--Associated Press

"Ruth Ware's The Woman in Cabin 10 is an atmospheric thriller as twisty and tension-filled as her 2015 debut, In a Dark, Dark Wood... The novel's tone is dark and claustrophobic as Lo continues her search for the woman even though someone is trying to stop her -- maybe even kill her."--The Washington Post

"If you're a fan of Agatha Christie, get ready to curl up with this suspenseful mystery."--Bustle

FROM THE AUTHOR OF IN A DARK, DARK WOOD

From New York Times bestselling author of the &;twisty-mystery&; (Vulture) novel In a Dark, Dark Wood, comes The Woman in Cabin 10, an equally suspenseful and haunting novel from Ruth Ware&;this time, set at sea.

In this tightly wound, enthralling story reminiscent of Agatha Christie&;s works, Lo Blacklock, a journalist who writes for a travel magazine, has just been given the assignment of a lifetime: a week on a luxury cruise with only a handful of cabins. The sky is clear, the waters calm, and the veneered, select guests jovial as the exclusive cruise ship, the Aurora, begins her voyage in the picturesque North Sea. At first, Lo&;s stay is nothing but pleasant: the cabins are plush, the dinner parties are sparkling, and the guests are elegant. But as the week wears on, frigid winds whip the deck, gray skies fall, and Lo witnesses what she can only describe as a dark and terrifying nightmare: a woman being thrown overboard. The problem? All passengers remain accounted for&;and so, the ship sails on as if nothing has happened, despite Lo&;s desperate attempts to convey that something (or someone) has gone terribly, terribly wrong&;

With surprising twists, spine-tingling turns, and a setting that proves as uncomfortably claustrophobic as it is eerily beautiful, Ruth Ware offers up another taut and intense read in The Woman in Cabin 10&;one that will leave even the most sure-footed reader restlessly uneasy long after the last page is turned.

6. The Woman In Cabin Ten