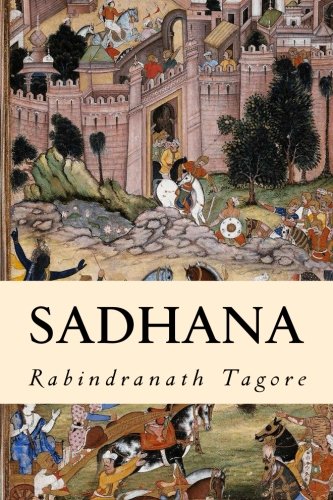 Sadhana, literally "a means of accomplishing something", is an ego-transcending spiritual practice. It includes a variety of disciplines in Hindu, Sikh, Buddhist and Muslim traditions that are followed in order to achieve various spiritual or ritual objectives.

From the Inside Flap:

Written by Nobel Prize Laureate Rabindranath Tagore and available in paperback for the first time, "Sadhana is a profound, highly accessible introduction to India's ancient spiritual heritage.
Few figures in history have been as important as Rabindranath Tagore in bringing Indian philosophy and spiritual teachings to the West. Although he was known primarily as a poet, his work is deeply religious, imbued with his belief that God can be found through personal purity and service to others. "Sadhana (sometimes translated from the Sanskrit as "spiritual practice" or "spiritual discipline") is a beautifully written, concise distillation of the great resources of Indian philosophy. With the surge of interest in Indian spirituality, it will be welcomed with enthusiasm by readers everywhere.

RABINDRANATH TAGORE (1861–1941) was a poet, philosopher, novelist, and playwright. Born in Calcutta and educated in England for a short time, he was the first non-Westerner to receive the Nobel Prize for Literature (1913).