Tales of the Airship Neverland Volume II: Captain Hook and the pirates of Mars: Volume 2 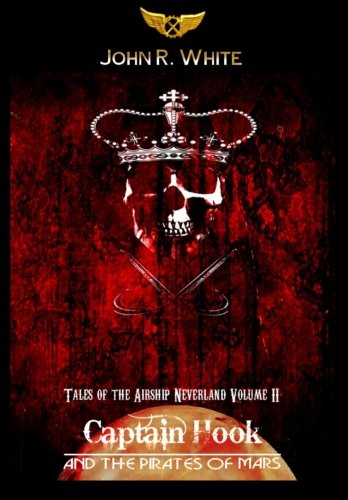 Three years have gone by since Tales of the Airship Neverland: a steampunk fairy tale has taken place. We find that Windy Darling’s pursuit of the Traitor James Hooker has gone cold, and her son, King ‘Nibs’ is threatening to shut down the hunt. Onboard the Neverland turmoil brews; Windy’s brother and his wife, the former pope Joan have abandoned the ship and the marriage of Angela ‘Tinker’ Belle and Peter Pan is sinking fast. Elsewhere a long forgotten evil is creeping towards the surface, and may forever change the future of the war. Quotes about ‘Tales of the Airship Neverland: "Airship Neverland is a fun, nuanced, steampunk vision of the classic story of Captain Hook and the Lost Boys. It's the clockwork and airship journey of how people came to be the characters we know from our youth." Kevin D Steil ~ Airship Ambassador “The reader gets so caught up in the story that he has a hard time returning to reality. The book is a page-turner.” Nancy McCullough~ Steampunk Chronicle Series twice nominated for awards in steampunk writing. Series includes: Volume I) Tales of the Airship Neverland: a steampunk fairy tale. Volume 1.5) Fairy Dust Never Rusts: a Novella

John R. White is an author, illustrator, student of philosophy and religion, a Veteran and has served as the Art director for the Honor Flight Network. He has lived in Italy, Canada and now resides in Toledo, Ohio with his lovely bride, Mary and their feline overlord, Tesla. John is a regular Midwest steampunk convention guest since entering the steampunk scene in 2010.