Artículos relacionados a Stories Of Your Life And Others

Chiang, Ted Stories Of Your Life And Others

Stories Of Your Life And Others 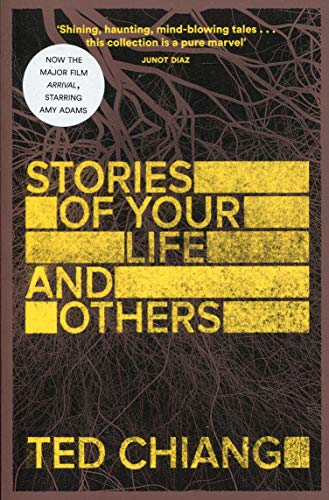 I think Chiang is one of the great science fiction short story writers of all time . . . I get absorbed in things, I say "Hey, that's nifty," but it's not often these days that I have that "What? What? Wow!" experience. Chiang does it for me practically every time. There's no wonder he keeps winning awards-he really is just that good. I generally try not to simply burble incoherently that things are brilliant and you have to read them, but faced with stories this awesome, that's pretty much all I can do * Jo Walton, Tor.com * It will not take readers new to these stories very long to appreciate their quality and beauty * https://www.sfsite.com * Chiang is the real deal. His debut collection, Stories of Your Life and Others is one of the finest collections of short fiction I have read in the last decade. These tales possess the imaginative frisson that is a trademark of the best conceptual fiction, but, also bespeak a confident prose style and a willingness to take chances in tone and narrative structure * Ted Gioia * The stories range widely in time, subject and style but are united by a patient but ruthless fascination with the limits of knowledge * Ed Park, Los Angeles Times * Throughout all his work, though no more so than in "Story of Your Life," you can feel his months of removing sentences from his stories. Perhaps that he writes so little does something good for him, or maybe it's just that he doesn't write enough * Choire Sicha * Science fiction is a genre that often works well off the page. Spaceships and robots are just as thrilling on screen as in books. But Mr Chiang's approach is irreplaceable. His stories mirror the process of scientific discovery: complex ideas emerge from the measured, methodical accumulation of information until epiphany strikes. . . . The best science fiction inspires awe for the natural properties of the universe; it renders the fundamentals of science poignant and affecting. Mr Chiang's writing manages all of this. He deserves to be more widely read * The Economist blog * Essential. You won't know SF if you don't read Ted Chiang * Greg Bear * Chiang derides lazy thinking, weasels it out of its hiding place, and leaves it cowering * Washington Post * Confirms that blending science and fine art at this length can produce touching works, tales as intimate as our own blood cells, with the structural strength of just-discovered industrial alloys * Seattle Times * He puts the science back in science fiction--brilliantly * Booklist (Starred Review) * Chiang writes seldom, but his almost unfathomably wonderful stories tick away with the precision of a Swiss watch--and explode in your awareness with shocking, devastating force * Kirkus Reviews (Starred Review) * Meticulously pieced together, utterly thought through, Chiang's stories emerge slowly...but with the perfection of slow-growing crystal. * Lev Grossman * Ted is a national treasure...each of those stories is a goddamned jewel * Cory Doctorow * United by a humane intelligence that speaks very directly to the reader, and makes us experience each story with immediacy and Chiang's calm passion * China Mieville, Guardian * Shining, haunting, mind-blowing tales . . . this collection is a pure marvel. [Ted] Chiang is so exhilarating so original so stylish he just leaves you speechless. I always suggest a person read at least 52 books a year for proper mental functioning but if you only have time for one, be at peace: you found it * Junot Diaz *

Includes 'Story of Your Life' the basis for the major motion picture Arrival, starring Amy Adams, Forest Whitaker, Jeremy Renner, and directed by Denis Villeneuve. With Stories of Your Life and Others, his masterful first collection, multiple-award-winning author Ted Chiang deftly blends human emotion and scientific rationalism in eight remarkably diverse stories, all told in his trademark precise and evocative prose. From a soaring Babylonian tower that connects a flat Earth with the firmament above, to a world where angelic visitations are a wondrous and terrifying part of everyday life; from a neural modification that eliminates the appeal of physical beauty, to an alien language that challenges our very perception of time and reality. . . Chiang's rigorously imagined fantasia invites us to question our understanding of the universe and our place in it.

1. Stories Of Your Life &amp; Others

2. Stories Of Your Life & Others