Artículos relacionados a A Treasury of Songs

Donaldson, Julia A Treasury of Songs

A Treasury of Songs 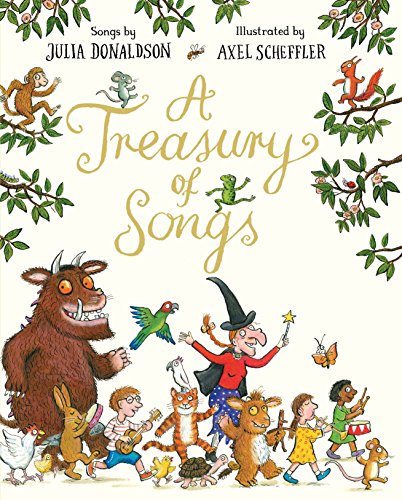 As well as being the UK's most successful picture book author, Julia Donaldson is a gifted songwriter for children. A Treasury of Songs contains over twenty of her songs, including fun-filled action rhymes, Aesop's fables, and songs based on Julia Donaldson's best-loved picture books, from Room on the Broom to The Gruffalo. This beautifully produced songbook treasury is illustrated throughout with Axel Scheffler's warm and wonderful artwork, and comes with a CD of all the songs performed by Julia herself, which will be familiar to anyone who has heard them on TV or radio or enjoyed one of Julia's live performances. With a shiny foiled jacket, luxury extra-thick paper and a foreword by the author, this is the perfect gift for all fans of Julia Donaldson and Axel Scheffler.

Julia Donaldson is the outrageously talented, prize-winning author of the world's best-loved picture books, and was the 2011-2013 UK Children's Laureate. Her books include Room on the Broom, What the Ladybird Heard and the modern classic The Gruffalo, which has sold over 13.5 million copies worldwide and has been translated into over sixty languages. Julia also writes fiction as well as poems, plays and songs and her brilliant live children's shows are always in demand. Julia and her husband Malcolm divide their time between Sussex and Edinburgh. Axel Scheffler is a star illustrator whose instantly recognisable, warm and witty illustrations have achieved worldwide acclaim and numerous awards. In addition to his picture books, Axel is the illustrator of wonderful novelty and gift books for Macmillan, such as the bestselling The Bedtime Bear, The Tickle Book and Mother Goose's Nursery Rhymes. He also illustrates the popular Pip and Posy series. Born in Hamburg, Axel now lives with his family in London.

2. A Treasury of Songs