Artículos relacionados a The Trader's Gift 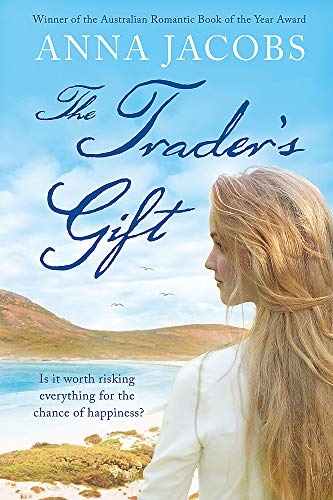 Bram Deagan has a thriving trading business, a beautiful wife and a growing family. Since he has a gift for matchmaking and wishes to see his friends Dougal and Mitchell happily married too, he doesn't hesitate to suggest they find wives.

In England, Eleanor Prescott has not forgotten the ship's captain who was a true friend to her. Dougal McBride told her to come to him if she was free. When her ailing husband dies, she wonders if she dare return to Western Australia. Will Dougal still want her after nearly a year?

Mitchell Nash has asked his cousin in England whether he knows any suitable lady. Though what sort of woman would make such an arduous voyage to marry someone she's never met? For one widow, however, desperate to keep her young son from a cruel relative's clutches, Mitchell's invitation is a lifeline she will grasp with both hands.

Both Eleanor and Jacinta bravely take a huge risk on the chance of happiness and set off for Australia. But for Jacinta at least, the troubles of her old life can't be easily left behind.

'This story has something happening on every page...great characters and the ensemble of secondary characters flow easily with some quite complicated plots flowing well around the central story.' (Australian Romance Readers Association on THE TRADER'S SISTER)

Anna Jacobs' books are deservedly popular. She is one of the best writers of Lancashire sagas around. (Historical Novels Review)

This is a fascinating insight into a piece of Australia's history that receives little attention. (Newcastle Herald, Australia on FREEDOM'S LAND)