Artículos relacionados a Ivanhoe (Illustrated by Milo Winter with an Introduction... 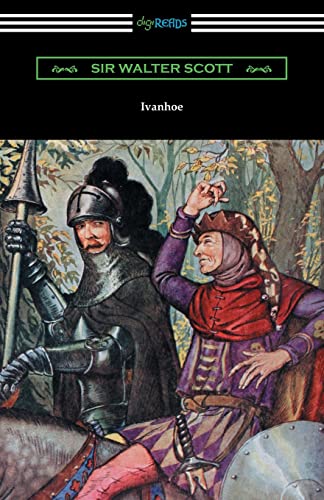 One of Sir Walter Scott's most popular and influential works, "Ivanhoe" is the story of one of the last remaining Saxon noble families. At the beginning of the novel we find its titular character, Sir Wilfred of Ivanhoe, who has been disinherited by his father for his allegiance to the Norman king, Richard the Lionheart, and for falling in love with the Lady Rowena, returning from the Third Crusade. Wilfred's father, Cedric, had planned to marry Lady Rowena to the powerful Lord Athelstane, in order to bolster the position of the Saxon nobility, whose power is being surpassed by the Normans. Wilfred is coaxed into participation in a tournament attended by Lady Rowena with whom he hopes to reunite. He quickly finds himself embroiled in a power struggle between Prince John, who oversees the tournament and is scheming with the help of knights of the Templar Order to control the throne, and the noble and rightful King Richard. "Ivanhoe", which provides us with one of the most popular literary depictions of Robin Hood and his merry men, is a classic tale of the middle ages, filled with chivalry, adventure, and romance. This edition is printed on premium acid-free paper, is illustrated by Milo Winter, and includes an introduction by Porter Lander MacClintock.