ArtŪculos relacionados a Forensic and Medico-legal Aspects of Sexual Crimes... 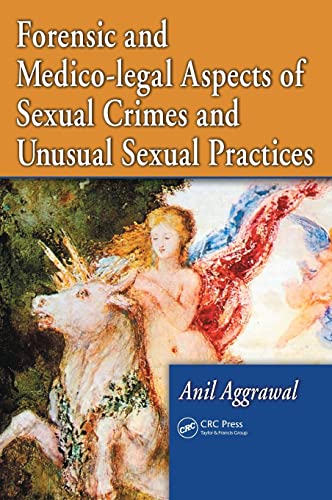 This is a quite remarkable book. For the first time an authoritative text for medical, psychiatric, psychological, forensic, and legal professionals has been written which addresses both the clinical and legal dimensions of the paraphilias. Dr. Aggrawal deftly brings to bear his 25 years of interest and knowledge of sexual deviancy and sex crimes in an authoritative and comprehensive textbook. The book generally follows the organization of the DSM paraphilias, and elucidates in separate chapters their respective definitions, etiology, history, epidemiology, medical characteristics, management, and legal understanding in various U.S. jurisdictions and other selective countries. One of the most enjoyable aspects of this book is Dr. Aggrawal’s grasp of ancient references concerning the paraphilias in both religious and historical texts, and his illustrations through the selective use of contemporary clinical and legal cases. The book also contains well-written chapters on rape and sexual harassment, and a comprehensive appendix of paraphilias, no less than 547 cited in the scientific and lay literature. ... this book will likely become a fixture in most forensic libraries... .
―J. Reid Meloy, Ph.D. writing in American Academy Journal of Forensic Sciences January 2010, Vol. 55, No. 1

This is a useful source book which describes a wide spectrum of sexual practices and differentiates between those which are illegal (with helpful comparisons between national jurisdictions and legal codes), those which may escalate to that category, and those that merely push the boundaries of what any particular society or time would deem "normal". ... makes interesting reading, especially in its wide ranging exploration of paraphilias and may be a useful reference for those working in the field of both sexual offences and psychosexual therapy.
―Caroline M. Jones, Forensic Physician, writing in Journal of Forensic and Legal Medicine September 2010

From sexual abuse and fetishism to necrophilia and sadomasochism, this unique volume identifies fourteen classifications of unusual sexual pathologies. Emphasizing the physical and psychological aspects of sexuality itself, the book presents detailed comparisons of legal and medical definitions, historical aspects, current incidence, and geographical prevalence of these offenses. It also explores the potential causes, discussing etiological theories and reviewing psychopathology. Highlighting the cross-cultural nature of the forensic aspects of human sexuality, the book examines various case studies in the context of international legislation. It also covers minor aberrant behavior such as coprolalia and troilism.