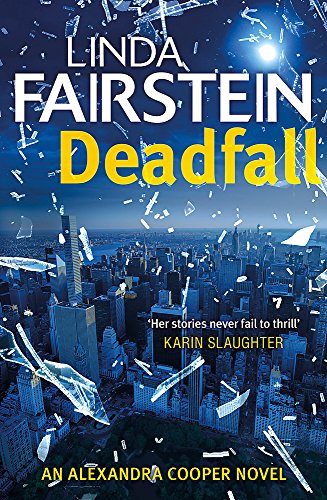 A wild heart beats within New York City. Amid concrete and skyscrapers, the Wildlife Conservation Society works to preserve and protect the animal kingdom both within and beyond the borders of the five boroughs. But dangerous creatures don't always have claws and fangs, as Assistant DA Alexandra Cooper and NYPD detectives Mike Chapman and Mercer Wallace know all too well. Predators lurk close to home, and in the aftermath of the shocking drive-by murder of an important city employee - someone Alex has worked with for years - the trio must discover who the bigger snake is: the killer or the victim.

Investigations into the death provide more questions than answers, as a tangled mess of secrets slowly comes to light. From bribes to secret societies, from big-game hunting to the illegal animal trade, from New York City zoos to behind closed doors in government buildings, Alex will have her work cut out for her if she wants to uncover the truth - and uphold the integrity of the office she has so proudly served.

Deadfall proves once again why Linda Fairstein is hailed as "a champion teller of detective tales."*
*USA Today

Linda Fairstein is a former prosecutor and one of America's foremost legal experts on crimes of violence against women and children. For three decades she served in the office of the New York County District Attorney, where she was Chief of the Sex Crimes Prosecution Unit.

In 2010 she was the recipient of the Silver Bullet Award from the International Thriller Writers association. Her Alexandra Cooper novels have been translated into more than a dozen languages and have debuted on the Sunday Times and the New York Times bestseller lists, among others. She lives in Manhattan and on Martha's Vineyard.

Descripción Paperback. Condición: Good. The book has been read but remains in clean condition. All pages are intact and the cover is intact. Some minor wear to the spine. Nş de ref. del artículo: GOR009362973

Descripción Paperback. Condición: Very Good. The book has been read, but is in excellent condition. Pages are intact and not marred by notes or highlighting. The spine remains undamaged. Nş de ref. del artículo: GOR008522299

Descripción Paperback. Condición: Fair. A readable copy of the book which may include some defects such as highlighting and notes. Cover and pages may be creased and show discolouration. Nş de ref. del artículo: GOR010246051

Descripción Little, Brown, 2017. Condición: Good. Ships from the UK. Former Library book. Shows some signs of wear, and may have some markings on the inside. Nş de ref. del artículo: GRP106390762