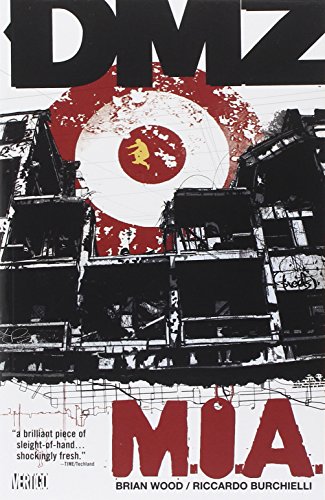 Written by BRIAN WOOD Art by RICCARDO BURCHIELLI Cover by JP LEON After the shattering events of HEARTS AND MINDS, M.I.A. takes Matty to a remote and desolate section of the city. Self-exile forces him to take a good, hard look at himself and his conduct since he entered the DMZ, and he doesn’t like what he’s seeing. His discovery presents him with an opportunity that he’s tempted to take, but is the price too high? This volume collects issues #50-54 and includes a pinup gallery with art by Jim Lee, Dave Gibbons, Eduardo Risso and others. On sale FEBRUARY 16 · 128 pg, FC, MATURE READERS

Multiple Eisner Award nominee Brian Wood released his first graphic novel, Channel Zero, to considerable critical acclaim, and over the last fifteen years has created hard-hitting and socially-relevant original series such as DMZ, Northlanders, The Couriers, and The Massive. He's also written for some of the biggest titles in pop culture, with work on Star Wars, Conan The Barbarian, Lord of the Rings and X-Men. He lives with his family in Brooklyn. Riccardo Burchielli made his debut in the world of comics in 2003 on the monthly series John Doe. During this time he also worked on short stories for Skorpyo and Lanciostory, two of the most important comics magazines in Italy. His big breakthrough in American comics came in 2005 illustrating and designing the critically acclaimed series DMZ, an intense modern-day war story, written by Brian Wood.